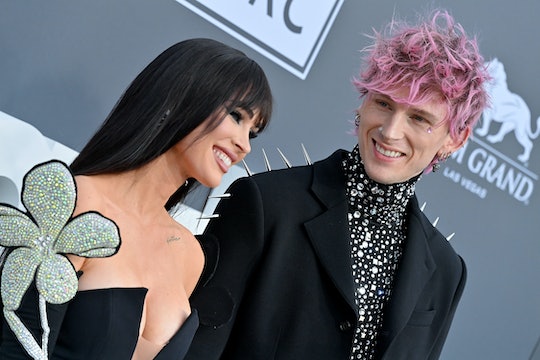 “broke my heart to sing the end of that song.”

Machine Gun Kelly dedicated his 2022 Billboard Music Awards performance to two special people in his life. On Sunday, the 32-year-old musician performed his song, “Twin Flame,” and told the audience he wrote it for his “wife,” Megan Fox, and their “unborn child.”

“I wrote this song for my wife,” he said at the beginning of his performance. In between the lyrics, he added, “and this is for our unborn child,” followed by the sound of a heartbeat.

Shortly after his performance on Sunday, the rapper tweeted that it “broke my heart to sing the end of that song.”

“i recorded twin flame 2 years ago today, the second half came a year later. beautifully serendipitous getting to sing it for you tonight,” he added in follow-up tweets. “it’s a full blood moon and an eclipse tonight…magic.”

Although Fox and Baker have not publicly announced they tied the knot, MGK’s shout-out on Sunday had many speculating that the couple recently upgraded their status to marriage and may have also have a baby on the way. “WAIT MGK & MEGANFOXmarried????? Pregnant???? Oh my,” one person tweeted. Another tweeted, “meganfox is pregnant w mgk’s kid and they’re married???? why am i finding out about this on nbc wtf.”

And while they haven’t addressed the recent speculation about their relationship, Fox and Baker reportedly want to start a family together. “They want to get married and eventually have more kids,” a source told Entertainment Tonight. “MGK would love to start a family with Megan someday, but right now doesn’t seem to be the time in terms of scheduling.”

Their schedules are surely no less busy these days. Only time will tell what the future holds for these two lovebirds.

More Like This
Janet Jackson's Son Eissa Is A Little Musical Prodigy In The Making
Ciara’s Kids Make The Sweetest Cameo In Her New Song “Treat”
Elon Musk's Child Files To Change Name, No Longer Wants To Be "Related" To Father
Tom Hiddleston & Zawe Ashton Are Expecting Their First Child Together