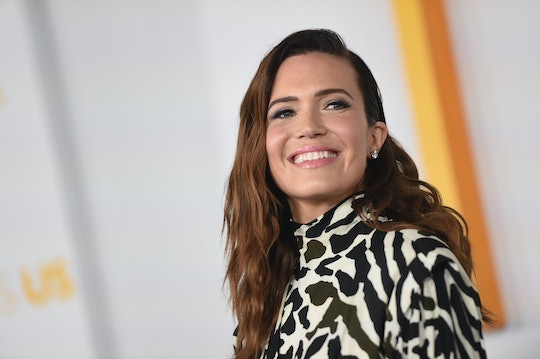 And revealed he arrived as the soundtrack of Willie Nelson’s Stardust played in the background.

In October, Mandy Moore joined the “Two-Under-2” club when she, her husband Taylor Goldsmith, and their first child, Gus, welcomed their new baby boy, Ozzie, into the family. Nearly one month later, she celebrated this milestone by sharing beautiful pictures of his birth on Instagram and it’s giving us all some serious Baby Rabies.

“One month with our Ozzie. I’m still able to access everything about that moment, which simultaneously feels like one second ago and also unimaginable to fathom life before,” she wrote “Thank you, Dr. Waldman, our rockstar L&D nurse, Athena, and our doula (and photographer) Rebecca Coursey for holding space and allowing for such a transcendent birth experience. Baby boy came into this world to the soundtrack of Willie Nelson’s ‘Stardust.’ Good choice, sir!”

Moore announced her pregnancy in June of this year, also on Instagram. After gracing fans and followers with a few bump pics throughout her pregnancy (and a few adorable moments with the soon-to-be big brother), Moore shared that she had given birth just a day after her son was born. “Ozzie is here!” she wrote on October 21. “Oscar Bennett Goldsmith arrived a little late but with much aplomb (and an easier/speedier delivery than his big brother, much to the delight of his parents). Every adage is true: our hearts have doubled in size and the immediacy of the love is astounding. He is beyond words and we are so grateful for our family of four!”

Her latest pictures give a more intimate look at those few days and really capture the joy and overwhelming emotion so many new parents feel when their child is born.

Moore told Romper in 2021 that her journey to motherhood was not initially smooth. She and Goldsmith had tried for a while to conceive before reaching out to a fertility specialist, who informed Moore that there was an issue with her uterus, possibly endometriosis. But before she could go in for her scheduled surgery to remedy the issue, she fell pregnant with Gus. She was elated, but cautious. “Because of this issue with my uterus, I was very hesitant to believe it and put any stock in it. I sort of was holding my breath until 12 weeks,” she says, noting that the experience made her realize she wasn’t as aware of her body as she thought she was.

But while the road may have had some bumps along the way, we hope Moore is enjoying the destination.