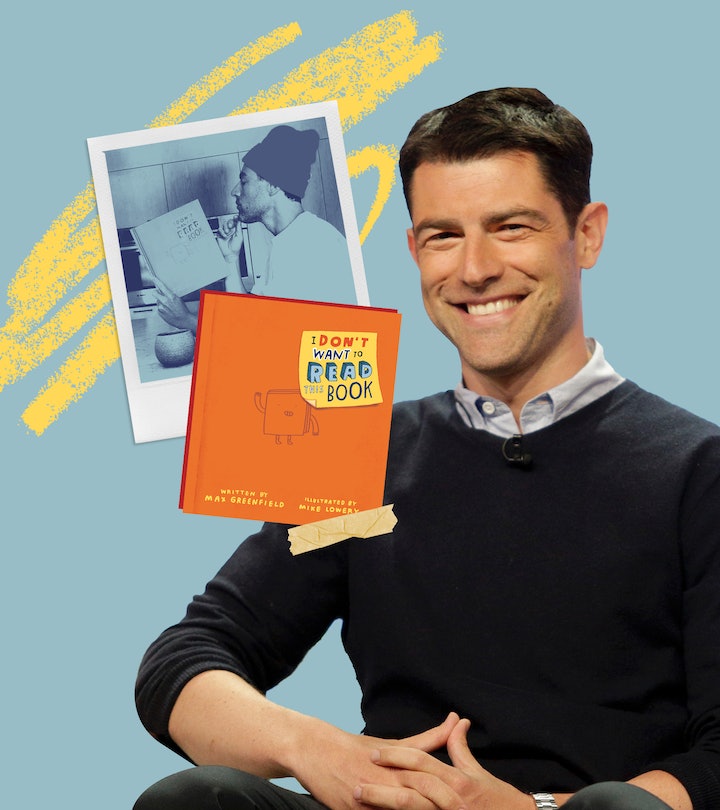 “It's a book about not wanting to read a book, in the hopes that your kids read that book.”

The back cover of Max Greenfield’s debut children’s book poses a simple question: “Why would I read this book?”

For many, many kids — even the ones whose parents love to read and assumed they’d have a batch of little bookworms themselves (sigh) — the answer just might be, “I’m not going to!”

Those are the kids for whom the actor and dad of two (his daughter Lilly is 11; her little brother Ozzie, 6) wrote I Don’t Want To Read This Book. Illustrated by Mike Lowery, Greenfield’s picture book invites reluctant readers on a wry, irreverent adventure, with exuberant drawings and graphics, and lots of winks to kids who will wink back. (“Chapter 2” is titled, “I Still Don’t Want To Read This Book.”)

As any fan of Greenfield — New Girl fans will be stanning to the end of time — would expect, it’s full of dry humor, and actually fun to read out loud.

Finding fun in something that feels an awful lot like a chore is actually what inspired the project: you probably remember the hilarious videos Greenfield and his daughter posted about their sudden adventures in homeschooling when the world locked down in March of 2020. (As Greenfield puts it, “They sort of blew up.”)

Eventually, the effort to create and post the videos started to feel like a job. “We went, ‘Oh no, this is not good,’” he laughs. But the cat was out of the bag; the public wanted more of Schmidt/Greenfield-as-a-dad content, and I Don’t Want To Read This Book was born.

We chatted with Greenfield about his co-collaborator, what he misses about that special togetherness time while his kids were stuck at home (spoiler: nothing!), and what happened when he read his Amazon reviews:

You told Kelly Clarkson, “I think we all know that kid who always had a book in their hands, who was in the corner, just always reading, the one who just couldn’t put it down. And, well, this book is for all the other kids.”

Is that you — were you the kid who didn't like to read?

Well, it's dedicated to my daughter, but I for sure was a kid that did not like to read. It was not something I ever enjoyed doing. Now as a parent, I'm reliving that struggle… as if I totally forgot my own experience.

It's a book about not wanting to read a book, in the hopes that your kids read that book.

I thought, well, if I was going to write a picture book, it would be completely based on my experience as a parent, which is spending those 30 minutes before you go to bed trying to convince your child to read one of the books that you have in your room.

In my case [my daughter], telling me what was wrong with each book and why she didn't want to read it. By the time we've gotten through that conversation, she had time to go to bed and we'll have read nothing. I said, "Well, what if you put that conversation into the book, and that's the book that you read?"

That's how it sort of came about. It's a book about not wanting to read a book, in the hopes that your kids read that book.

And what has the process of having a book come out been like?

I went on Amazon, and I went, "Oh my God, there's all these comments." I go, "You probably shouldn't read these."

Then of course I did read them. They were so nice!

Have your kids given you their reviews?

They're really excited about it! I don't think my son fully grasps the whole idea, but it's been really great for my daughter. My daughter was definitely a big part of not only inspiring the book, but also writing the book. I would run stuff by her every day and be like, "Does this sound right? Is this good? Is this funny?"

It was during that time, we were deep in lockdown. Nobody was out on the streets. Really, everybody was locked in their house. There was a group of kids in the neighborhood who would take bike rides. They would come down to our house and I'd sit on the front lawn with them and I would read them a draft of the book and I'd be like, "What do you think?" They would give me notes.

Are there any favorite books that you like to read together?

Well, in terms of children's books, I'm heavily into it with my son right now. We love Book With No Pictures. We love all the Crayon books. Then in terms of my daughter, our favorite is probably Matilda.

Such a good one. So, Lily is 11. Are you starting to kind of see your future as the parent of a teenager?

I'm not looking forward to it.

So your own kids are back in school now. Is there anything that you miss about having the kids home?

No. Hard no. Hard no with no thought!

I mean, Lily's at an age where she needs her friends and wants her friends way more than she wants me. She should! I'm really lucky that I have an acting job , and have had one for the past four years [on CBS’s The Neighborhood], which allows me to see my kids a lot. It's part of the reason why I took that job in the first place. With a multi-cam sitcom, you're rehearsing most of the week. It's the closest thing to a nine to five that you can get. Most days it's like a nine to three.

I'm dropping my kids off every day. It rules. My daughter is in volleyball and I got to see 90% of her games. I made the decision to spend more time with them before everything happened. Then I was like, "Well, this is just too much time."

Too much time. Yes.

Next I'm going to take a job that puts me in Australia for two years and go, "I'm taking a break. You guys have had enough."