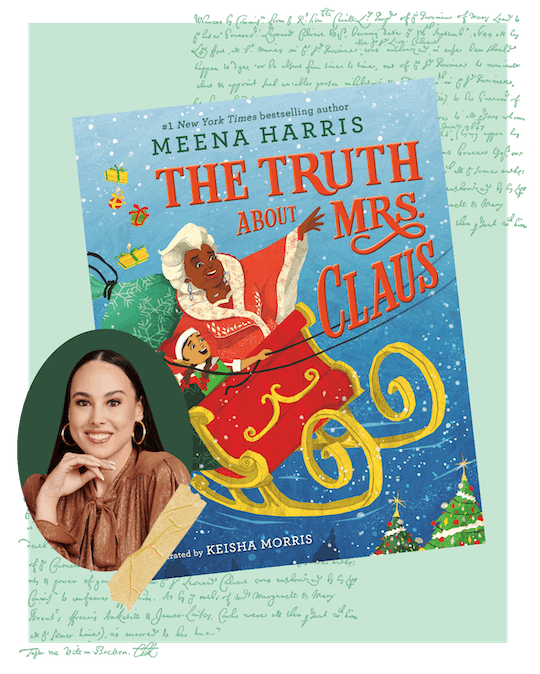 This delightful story celebrates finding your own path — and has plenty of Christmas magic.

The Truth About Mrs. Claus is the first holiday book I’ve seen this season with a Mrs. Claus of color. While this shouldn’t be a big deal, in a world where I still have to do extensive research to find a local Black Santa, it is for me, and for many parents of color. Bestselling author Meena Harris’ newest children’s book tells the tale of Amalia, a little girl who discovers the truth of her own purpose while she honors her family legacy. This new take on the North Pole story, illustrated by Keisha Morris and told from Amalia’s perspective, features more than a few wonderful elements that make it a unique offering for the holiday season.

Harris, a lawyer by training and niece of Vice President Kamala Harris, didn’t set out to make a point with her sweet story; it’s simply, she says, a reflection of how she sees the world. “I grew up in a community and in a home where Santa was Black, and that was who Santa was to me,” she tells me. “Santa looked like the people in my family, not necessarily the big white beard and the Christmas suit.” In fact, she stresses, “What’s really important to me is to be clear that this wasn't some grand political statement.”

“[Mrs. Claus] is Black because many of the women who taught me, like Mrs. Claus teaches Amalia, are Black and brown,” says Harris. “But truthfully, she could be really any color and my hope is that the message would be received the same… It's actually not even acknowledged in the book at all. It just is.”

That’s not the only way Harris’ own experience comes to life in the pages. Amalia comes from a long line of proud teddy-bear makers in Santa’s workshop. When she realizes that while she loves the storytelling part of sending teddy bears to little kids for Christmas, she’s not so excited about making the actual bears, she heads to the workshop to get some life advice from the big guy. Instead, she meets the ever-busy Mrs. Claus and soon learns that she is the behind-the-scenes brains behind Santa’s magic. Amalia and Mrs. Claus end up helping each other in this story that celebrates leaning into the strength of your own purpose as well as the power of finding your own destiny within the context of family.

This mirrors a journey Harris, who is also the CEO and founder of Phenomenal Media, has been on herself. “​​It's very reflective of my own path and questions that I had growing up — questions that I've had up until not that long ago about what my purpose is and what contribution I’m wanting to make to the world, to my family in a creative way, in a career way, and just be able to show up as my true self,” she says.

Showing up as your true self is a powerful theme in the book. Mrs. Claus is accustomed to staying out of the spotlight, letting Santa shine while she takes care of keeping everything in motion. But then she, too, learns that her story is needed. “Amalia helps her to see the power of sharing that story, and how it can have an incredible impact on other people — whether younger or peers of Mrs. Claus — and encourage them to share their truth and their story.”

As the mother of a bold, audacious little girl, I’m delighted to see a book that reinforces the idea that girls and women deserve to be heard and need space to tell our own stories. And, learning that adults are never too old to learn a thing or two from kids is a powerful lesson for children.

“The real theme for me in writing the book is really around finding the really basic stuff, right?” Harris says. “It's finding truth in your purpose. It's acknowledging the impact of tradition and family tradition … It's also a story about intergenerational learning and finding your own way, even when it means reshaping other people's expectations.”Marioa Del Rio
Little, Brown & Company
1/2

“I wanted to create a mutuality in the relationship with Amalia and Mrs. Claus, where Amalia is not only learning from Mrs. Claus, but vice versa,” says Harris. “It's about reflecting on my own experience of having someone like my grandmother, who was a real advocate for me and was in my corner and was somebody who really encouraged me to pursue my personal passions and didn't put pressure on me to be like anyone else… Growing up in an immigrant household with my grandmother being a second mother to me, that intergenerational learning with each other was incredibly important for me.”

As a mom to two Black multiracial children, I see the characters featured in my kids’ books through the lens of our identity. Though the children’s publishing world has made great progress in the last few years in telling the stories of people from many identities (and supporting them in telling their own stories), there’s still an immensely long way to go. When I visit my local library with my kids and we explore books to borrow, I’m always leaning towards books that feature characters of color in ways that celebrate their multi-dimensional lives. The Truth About Mrs. Claus fits right into this category, and should be on bookshelves everywhere, packed full with lessons and joy for our little ones. And hopefully soon, those bookshelves will reflect the world in which all of our kids are growing up.

“I think the power of representation ultimately is not just to have a Black Mrs. Claus or a Black Mermaid, but it's to tell all of our stories and all of their nuances in all of these different ways,” says Harris. “And for that to be the norm.”

More Like This
25 Children’s Books About Death & Grief, To Help Get The Conversation Started
Julia Fox's Apartment Tour Is A Glorious Antidote To Influencer Culture
'Women Talking' Overwhelmed Me With Grief — And A Sense Of Possibility
Jinger Duggar Was Taught Motherhood Defined Her — & Then She Broke Free
What Parents Are Talking About — Delivered Straight To Your Inbox