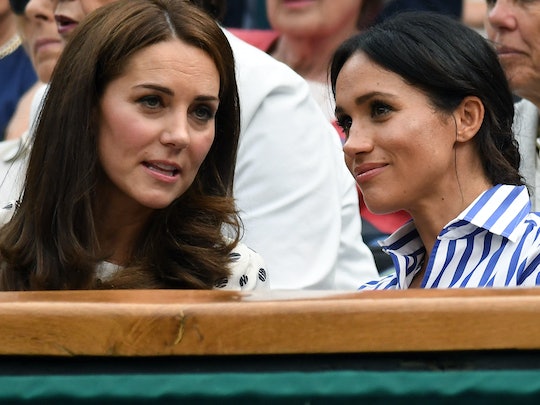 And Prince William makes a cup of tea.

If ever there was a Zoom invite I would accept without a second of hesitation, this is the one. Apparently Meghan Markle and Kate Middleton have been enjoying Zoom chats with their husbands Prince Harry and Prince William on a fairly regular basis, and I would just love to know what they are discussing. I bet a certain little baby named Lilibet and her 2-year-old brother Archie get brought up in the conversation every now and again, not to mention their Cambridge cousins.

Royal expert Stewart Pearce told Us Weekly that the two brothers and their wives have been chatting regularly despite the thousands of miles between the Sussexes home in Montecito and the Cambridges in the United Kingdom. “I know that the four are talking with one another and they’re talking by Zoom [and by] FaceTime,” Pearce told the magazine. “They’re very close with one another.” So close that, according to Pearce, they reportedly chat away with “Kate cooking dinner in the kitchen” and Prince William “making cups of tea.”

Pearce added that the “remarkable” thing about the relationship between the two couples is that they manage to keep their different ways of viewing the world out of things, with the Sussexes “lens on the world is highly individualized,” Pearce said. “And what’s remarkable is that they all totally respect [each other], but this lens is different.”

While the two couples have struggled with frequent rumors of tension over the past year, which was presumably at least slightly exacerbated by Meghan and Harry’s interview with Oprah Winfrey in March, there have been several life events to bring them closer. The loss of Prince Harry and Prince William’s beloved grandfather Prince Philip in April, for one, and the arrival of Lilibet Diana, the Sussexes’ daughter, in June for another. An event which the Cambridges celebrated on social media with “delight” as soon as it was announced.

Kate Middleton and Meghan Markle’s relationship in particular seems to be getting closer all the time, with several media outlets reporting recently that the sisters-in-law are in talks to collaborate on a documentary about the behind-the-scenes life of the Duchess of Cambridge for Netflix.

The Cambridges and the Sussexes have so much to discuss with each other, so many shared experiences that are unique to them and basically no one else in the world. Plus... they have all those cute kids to show off on Zoom. We love to see it.