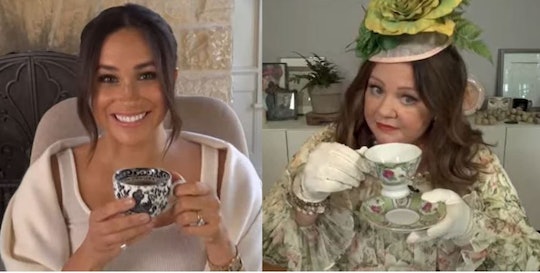 To celebrate her 40th birthday on Aug. 4, Meghan Markle is spreading joy. Not only did she make her first public appearance since giving birth to her daughter, Lilibet, in June, but the Duchess of Sussex also shared that her wish this year is to help others. In a video with actress Melissa McCarthy, the two announced a new campaign called 40x40 that aims to encourage women to get back into the workforce after losing their jobs during the pandemic.

Meghan’s new campaign encourages people around the world to give 40 minutes of their time to support women going back to work. “Because I’m turning 40, I am asking 40 friends to donate 40 minutes of their time to mentor a woman whose mobilizing back into the workforce,” the Duchess of Sussex explains in the video posted on Archewell’s website. “Over 2 million women in the U.S. alone and tens of millions around the world have lost their jobs due to Covid, and I think if we all do it and all commit 40 minutes to some sort of act of service we can create a ripple effect.”

A 2020 report from the National Women’s Law Center found that Black and Latina women were particularly hit hard with unemployment as a result of the pandemic. And of last June, 97% of women who returned to the workforce are unemployed and looking for work, the organization found. Mothers have accounted for a large number of women not working due to Covid-19; according to a U.S. Census Bureau data report from this past March, at least 10 million moms were reported as unemployed.

40x40 is the latest initiative spearheaded by the Sussexes’ nonprofit, Archewell, which is also behind Meghan’s bestselling children’s book The Bench as well as Prince Harry’s Apple TV+ series with Oprah Winfrey on mental health. Those who are interested in getting involved with 40x40 can find more info on their website.

Before she explained the campaign, the video starts off with the two women sitting in their respective homes: McCarthy working on a Rubix cube and the duchess sitting at her computer.

“Hey Melissa, do you have a second,” Meghan asks the actress and comedian in the video.

“Hey yea, of course,” the Ghostbusters actress responded. “Remember I told you I was working on that organic garden? That’s what I’m doing.”

“You know your camera’s on right? I can see you,” Meghan responds.

Even the Duke of Sussex, Prince Harry, makes a cameo — juggling tennis balls outside of the window. Just a typical day in the Sussex household, apparently!

Meghan, who shares a birthday with former President Barack Obama, is being celebrated across the pond and across social media. In addition to the hashtags #Meghans40celebration and #MeghanMarkle40 trending on Twitter, members of the royal family also posted sweet birthday messages for the duchess.