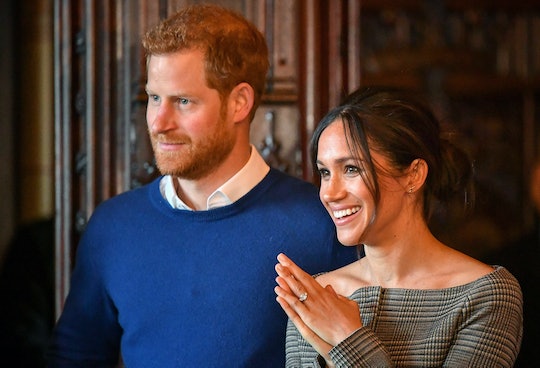 They recorded a sweet message for his retirement.

Elton John has been a fixture in Prince Harry’s life for years, ever since he was a little boy and the singer was close friends with his late mother, Princess Diana. And it seems that friendship has transferred to Prince Harry’s family as an adult. Prince Harry and Meghan Markle sent Elton John a surprise video message at his recent concert at Dodger Stadium, and their very real affection for the singer was a thing of beauty.

The Duke and Duchess of Sussex recorded a video message to John during his farewell concert in California over the weekend, a concert that was being filmed for Disney+ at the time. “Hi Elton, we just wanted to say congratulations,” Markle said at the outset of the video message, with Prince Harry adding his own congratulations. “And we are just so proud of you,” Markle added. “We're so grateful that we were able to see you on your farewell tour also.”

Prince Harry went on to thank his mother’s longtime friend for all of his support over the years, including his friendship with the couple’s two children, 3-year-old Archie and 1-year-old Lilibet.

Prince Harry went on to note that John had enjoyed an “incredible” career before his decision to retire, “Even though this is officially your retirement, this will not be your last gig, we know that. But we love you and congratulations on an incredible career.”

Royal fans will of course remember that Elton John performed a special version of “Candle In The Wind” at Princess Diana’s 1997 funeral, and he continued to honor his friendship with the late Princess of Wales by staying close to her sons. In fact, after Markle and Prince Harry welcomed their son Archie in 2019, John invited them to spend time with him at his home in the south of France to get away from the intense media scrutiny. He even defended them publicly from criticism on social media at the time, writing that he was “deeply distressed by today’s distorted and malicious account in the press surrounding the Duke and Duchess of Sussex’s private stay at my home in Nice last week.”

Through the years, Elton John has been there for Prince Harry and his family. And now Prince Harry is showing up for him as he prepares to retire. Princess Diana would be so proud of them both.