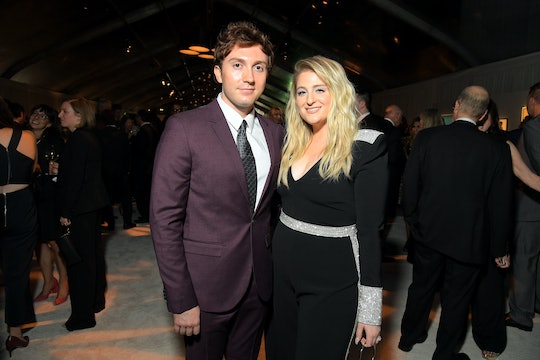 But jokes Spy Kids actor Daryl Sabara won't use the toilet with her anymore.

It seems Meghan Trainor is back to using the toilet solo. The “All About That Bass” singer showed off her controversial side-by-side toilets while joking in a TikTok video that she’d been left to pee alone after her husband grew fed up with news reports on their bathroom habits.

“POV: Your husband is all over the news about you having two toilets next to each other,” Trainor captioned a recent TikTok video of herself sadly sitting on one of her side-by-side toilets while Céline Dion’s “All By Myself” plays in the background. Beside her, the second toilet remains unoccupied.

Earlier in October, Trainor let it slip that she and husband Daryl Sabara had installed side-by-side toilets in their new Southern California home and often went to the bathroom together — at the same time. “Nobody knows this, but in our bathroom, there was one toilet,” Trainor said during an interview on Nicole Byer’s Why Won’t You Date Me? podcast. “And a lot of times in the middle of the night when we’re with the baby, we gotta pee at the same time. So I was like, ‘Can we please have two toilets next to each other?’”

According to Trainor, the couple’s contractor initially needed some convincing that two toilets in one bathroom were better than one, but eventually agreed to the install. “We got two toilets sitting next to each other, and we’ve only pooped together twice,” Trainor told Byer. “We pee at the same time a lot.”

Trainor later walked back her poop count in a tweet. “To clear things up…we pooped ONCE together and we laughed and said never again,” she tweeted. “But he will hang out with me if I’m [poop]ing cuz WE SOULMATES. And I legit miss him when I’m away from him. And we pee together obvi (sic).”

But while heated debate over the couple’s controversial toilet habits may have led Sabara to leave Trainor toileting solo, it will likely take a lot more to convince Trainor to uninstall the side-by-side toilets. “You expect me to change that?” Trainor scoffed when late-night host Jimmy Fallon recently asked her if she’d be changing the bathroom’s design. “No! It’s the best thing about my house.