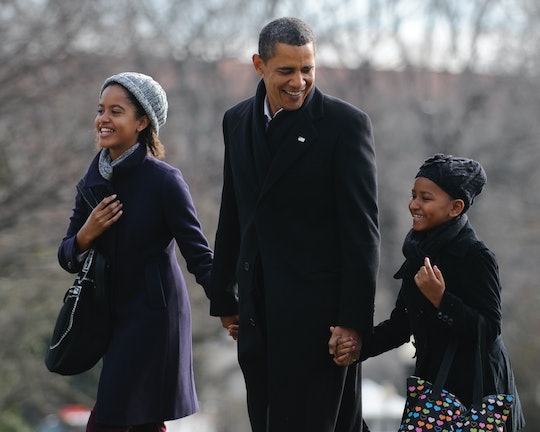 And is known to text his daughters in the middle of the night to make sure they’re prepared for a potential earthquake.

Barack and Michelle Obama are just like anyone else’s parents; they want to know what their kids are up to and don’t hesitate to check in on them with a text. Sometimes with several texts in the middle of the night... The former first lady recently gushed about how she and her husband affectionately keep tabs on their young adult daughters, Sasha and Malia, and it’s too relatable.

“When you’re letting your kids go, you’re letting your heart out there in the world,” she told NPR while promoting her new book, The Light We Carry. “Barack and I kind of do this crazy parent text check-in, like writing things that are keeping us up at night.” She recalled one text the former president sent to his daughters about an earthquake, including an extensive plan. “Barack one day sent them a text on earthquake preparedness because they now live in LA.”

“And that’s the kind of thing you do as a parent,” she added. “You think, ‘Uh oh, there are earthquakes. Have I warned them? Are they prepared?’ So in the middle of the night, he’s sending some article on a 10-step plan that includes, you know, getting earthquake training and stocking up on water.”

When Obama sent that text message, The Light We Carry author said one of her daughters replied “‘Okay… Which of these things do you think we should do? Because it’s a lot.’”

“But that’s our own anxiety playing itself out,” Obama told NPR. “You know, ‘What did I miss? What more can I feed into you to make sure that you’re safe and sound and secure?’ But the truth of the matter is that we don’t control that.”

The family has a group text, in which the former first lady says Barack is the most active, constantly sending lengthy articles to his girls on various topics. “He's still typical dad,” she told People. “You have these weird panic thoughts that your girls are out living in this messy world. And so, you think about crazy things you want to make sure you tell them. It's like, 'Remember, don't walk alone at night!' Barack sent them an email about earthquake preparedness because they're living in California. He's a big article sender and we all just read 'em and laugh.”

Sasha and Malia live together in Los Angeles. Malia works as a television writer and Sasha is a student at the University of Southern California. The sisters occasionally invite their parents over, most recently for appetizers and “weak” cocktails, as their mom recently revealed. Hey, practice makes perfect.

In the same interview with NPR, Michelle admitted parenting is hard, especially the growing up part, but it's a milestone that all parents must deal with. “That is the hardest thing about parenting, is living with that truth,” she said. “But the alternative is to stop them from growing. And that, in my view, would be the sad outcome: If my kids were sitting safe in my basement or in their rooms at home with me feeling comforted in the fact that I knew what they were doing and where they were, but not owning their own lives. I think that would be the sadder outcome. So I have to remind myself of that when I get the urge to step in.”