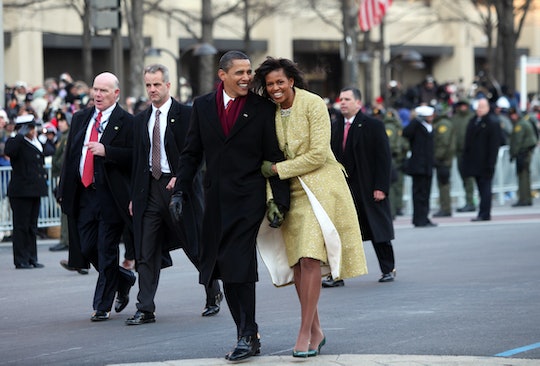 “Thank you for never letting the weight of the world get in the way of being a wonderful husband and father.”

Happy birthday, President Obama! The former POTUS turned 60 years old on Wednesday and got a loving message from his wife, Michelle Obama. The former first lady and Becoming author celebrated her husband by sharing a touching message and a rare family photo on social media. The candid and casual photo features the couple as well as their daughters, Sasha, 20, and Malia, 23, smiling in what appears to be a photo booth. Oh, and President Obama is giving Sasha bunny ears in the picture, so yes... it’s adorable.

“Of all of your accomplishments, I know that being a present, loving father to our girls tops them all,” the 57-year-old wrote on her Twitter and Instagram. “Thank you for never letting the weight of the world get in the way of being a wonderful husband and father. Happy 60th birthday, @BarackObama.”

The Promised Land author may have been a commander-in-chief but he is really a girl dad to his core. He’s supportive in anything his daughters may do. For example, during an appearance on The Late Late Show With James Corden back in May, Obama revealed his kids most likely won’t follow his footsteps in politics and he is OK with that.

“You have to have a certain tolerance for nonsense and silliness and meanness, frankly, to go into public service," Obama told Corden. “As a father, I want to protect my girls from that stuff. I think they are probably going to find other ways to serve rather than run for office themselves, but you never know. If they decided to do it, obviously I would be extraordinarily proud of them.”

He also admires their “badass qualities,” which he said comes from their mother.

There were plans to have a big birthday bash with hundreds of guests at Martha’s Vineyard, including current President Joe Biden. But due to the rise in Covid-19 cases, the party has reportedly been scaled back to just close family and friends.

But that hasn’t stopped his best friend from celebrating his special day. President Biden tweeted a birthday message to Obama that said, “I’m proud to call you a brother and a friend — and I’m grateful for your selfless service to this nation.”