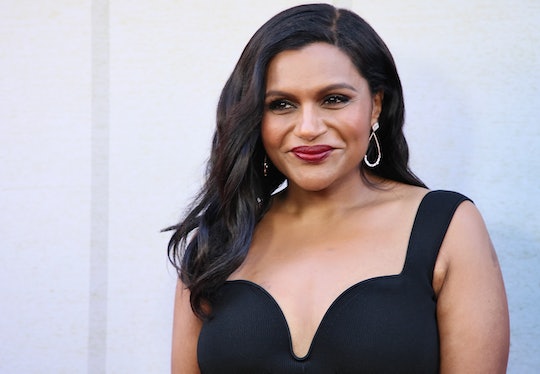 Mindy Kaling Confronted A Man Breaking Into B.J. Novak's Car When She Was Pregnant

As Kelly Kapoor would say, “How dare you.”

Mindy Kaling makes a living off of situation comedies, but the actress and mom of two knows a thing or two about scary situations too. When The Sex Lives of College Girls creator sat down for a recent TV interview, she shared a really frightening story about a car break-in that occurred when she was very pregnant and about to grab some dinner with her pal and ex-partner B.J. Novak.

It all went down on Jimmy Kimmel Live! when Kimmel asked Kaling if she has ever found herself in a genuinely scary situation. “The most genuinely scary situation I've ever been in was when I was actually eight-and-a-half-months pregnant,” Kaling said. “I went to dinner with my friend B.J. Novak ... He parked the car and we got out of the car, I noticed there was a weird kind of guy, staring at us from the parking meter.”

After it turned out the restaurant was closed, Kaling and Novak returned to their car but were in for a particularly unpleasant surprise. “We go back to the car and the guy that we had talked to by the meter had gotten into B.J.'s car, was sitting in the driver's seat and had B.J.'s laptop open and was on B.J.'s laptop.”

The former co-stars known for their “complicated relationship” then decided to confront the man, and Kaling actually blocked the door with her pregnant body. “My sense of justice was greater than my sense of wanting to live,” she joked.

And with a surreal plot twist you might expect on The Office, Kaling said that when the man exited the vehicle, he busted out with this line of comedy gold fit for any sitcom script: “You guys should be careful. Anybody could just get into your car.”

“As though this whole thing had been this like, ruse, he had planned to teach us a valuable lesson," said Kaling. “By the way, it did teach us that! And then he kinda wandered away.”

And then Kimmel chimed in with a great one-liner too: “Did ‘The More You Know’ rainbow appear at the end?”

In addition to chilling stories, Kaling and Kimmel also chatted a bunch about Halloween. Kaling called her Halloween “comprehensive,” which makes sense considering her 4-year-old daughter Kit is known to practice the “Thriller Dance” in preparation for the holiday. Kimmel mentioned his show’s infamous yearly tradition of parental revenge: “I Told My Kid I Ate All Their Halloween Candy.”

One of the most interesting parts of the interview was when The Mindy Project star revealed some amusing details about her daring daughter.

“My daughter is fearless.....she loves chainsaw massacres...she doesn’t like cutesy things. She likes when a family is destroyed.”