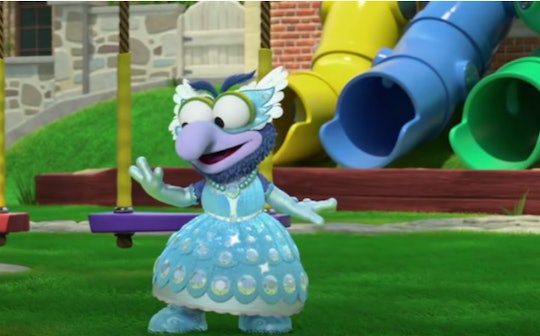 He was given a makeover by his “fairy rat father.”

For any kid who didn’t want to follow the traditional rule book when they got dressed. For any kid who has ever felt penned in by society’s expectations for what they considered normal behavior, Gonzo is here for you. In an episode of Disney Junior’s Muppet Babies called “Gonzo-rella,” the sweet blue muppet wants to wear a dress to the ball along with Miss Piggy and Summer. And his “fairy rat father” makes his wish come true.

The entire muppet baby gang is preparing to go to a royal ball in an episode of the CGI show when Gonzo sees the “royal handbook” and finds a dress he just loves. “I’d love to wear a dress like that to your royal ball,” he tells Miss Piggy, Summer, and Rizzo the Rat. Unfortunately he’s told by Summer and Miss Piggy that the girls wear dresses and the boys go as knights, according to the royal handbook. He looks crushed. Rizzo notices how sad he is and then shares the good news that he is a “fairy rat father” who can make his dream of wearing a “splenderific” dress come true, complete with glass sneakers, a mask, and an egg transformed into a “hard-boiled convertible” to drive him to the ball.

Much like the original Cinderella, Gonzo only has until midnight to be “Princess Gonzo-rella,” and has the time of his life with his friends. Who, spoiler alert, accept his desire to wear a dress when he eventually confesses that he was the mysterious Princess Gonzo-rella.

Gonzo wears a dress to the royal ball.

Gonzo’s dress received a bizarre reaction from right-wing pundits like Candace Owens, who tweeted her concern that “they are pushing the trans agenda on children via muppet babies,” adding “bring back manly muppets, anyone?”

Fortunately, Gonzo’s right to wear whatever he wants was defended vigorously by social media users who wrote messages of support like, “Don't we all love freedom? Shouldn't Gonzo have the freedom to wear what ever they like?” and this user who noted that Gonzo has been wearing dresses as a muppet for decades. “Who wants to be the one to tell her that Gonzo has worn a dress in the Muppets since 1975? Also, ‘bring back manly muppets’ ?!?!”

The Muppet Babies episode of “Gonzo-rella” was all about Gonzo wanting to be allowed to wear what he wanted. Period. He was happy, his friends liked his dress. And what’s even better; Gonzo showed kids that it’s okay to wear what you want. No matter what anyone tells you.

More Like This
Exclusive Eureka! Clip Introduces Star Of Disney’s New STEAM Preschool Series
'Caillou' Is Officially Getting A CGI Reboot Whether People Like It Or Not
Exclusive: 'Bluey' Celebrates Father's Day With A Look At Bandit's Best Moments
Viral TikTok Breaks Down How Beautifully Bluey Depicts One Character’s Infertility