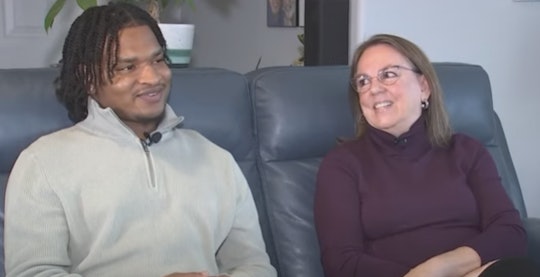 “You not my grandma. Can I still get a plate tho?”

Before an accidental text in 2016, Jamal Hinton had never met Wanda Dench. The high school senior wasn’t likely to be hanging out with a grandmother from Mesa, Arizona, after all. That was before. Before she mistakenly texted him with an invite to Thanksgiving. Before they started to spend their Thanksgivings together. Before they went viral. Now Netflix is turning their story into a movie called The Thanksgiving Text, and if it’s as heartwarming and lovely as the real thing, it’s bound to be a hit.

Five years ago, Wanda was trying to get in touch with her grandson to see if he was coming to Thanksgiving dinner. “Thanksgiving dinner is at my house on Nov. 24 at 3:00 pm. Let me know if you’re coming. Hope to see you all,” she wrote at the time, unaware that her grandson had changed his number. Instead, she reached Jamal, who asked her who she was. When she said it was his grandma and sent a photo, he jokingly responded from his math class, “You not my grandma. Can I still get a plate tho?”

He was surprised when Wanda responded, “Of course you can. That’s what grandmas do. Feed everyone.” What’s more... he showed up for the feast. And a beautiful tradition was born, one that went viral after Jamal shared his exchange with Wanda on Twitter.

Netflix is making a movie based on a beautiful friendship.

Since then, Wanda and Jamal have spent every Thanksgiving together along with both of their families.

Now their longstanding tradition will get the Netflix spin in The Thanksgiving Text, a movie based on their accidental friendship. And they couldn’t be more excited to see their story on the big screen. “We are excited to share our story with the world. We hope it inspires more people to reach out and make connections that they wouldn’t ordinarily make,” Wanda and Jamal said in a joint statement per Variety. “We are so blessed to find a genuine friendship brought together by God from a mistaken text message.”

No release date has been set for the movie, which will be written by Abdul Williams who wrote Salt-N-Pepa and The Bobby Brown Story.

As exciting as it is to have a movie made about them, these two friends have already gotten so much out of their friendship and the world’s response to it. “I’ve been enjoying almost every second of it,” Jamal told TODAY. “I was just telling Wanda the other day how it actually helps me get through the year sometimes to see so many uplifting comments, to see so many people looking forward to our story, that I just love it all.”