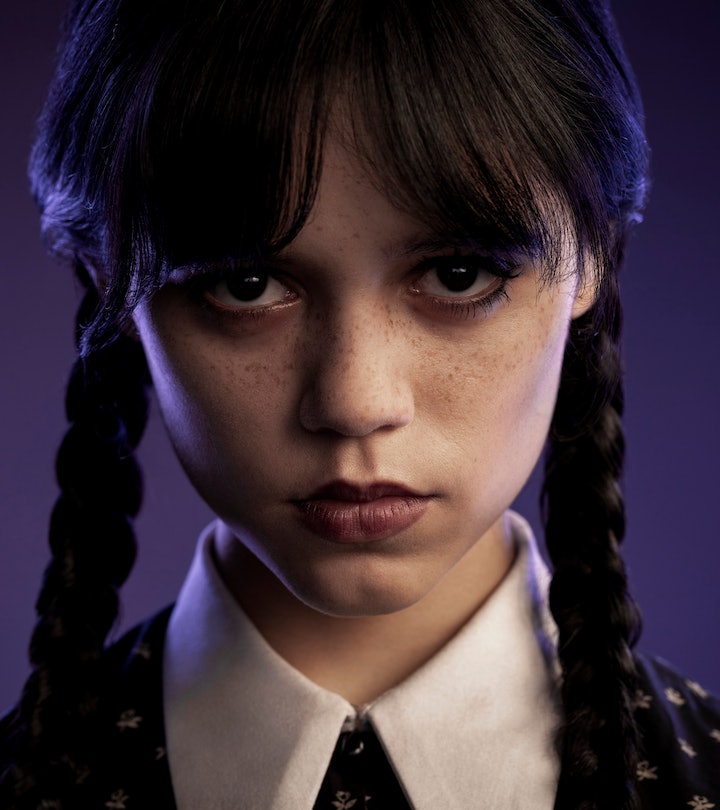 “She marches to her own beat... and it’s likely a funeral dirge.”

It’s not that Wednesday Addams is weird, she’s just different. And, OK, maybe she is a little strange — and she definitely likes things dark and dangerous — but that’s all part of her charm. Now, this famous character from the Addams family is getting her own show on Netflix, and we already know it’s going to be fantastic, especially now that we’ve gotten our first glimpse of the main cast.

Netflix announced the live-action series in February 2021. Written by Al Gough and Miles Millar (Smallville creators) and directed by Tim Burton, the series will focus on Wednesday, who is played by Jenny Ortega, whom you may recognize as Ellis in You or a young Jane in Jane the Virgin. It will also feature Christina Ricci, who played Wednesday in The Addams Family and Addams Family Values. If you are dying to know more about the new series, we’ve got you covered.

What is Wednesday about?

For starters, Wednesday will “see everyone’s favorite maiden of the macabre graduate into a full fledged leading lady,” Netflix’s director of YA/ Family Series Teddy Biaselli said in a statement.

Wednesday is going to be have some supernatural elements tied to it. The official logline reads: “The series is a sleuthing, supernaturally infused mystery charting Wednesday Addams’ years as a student at Nevermore Academy. Wednesday's attempts to master her emerging psychic ability, thwart a monstrous killing spree that has terrorized the local town, and solve the supernatural mystery that embroiled her parents 25 years ago — all while navigating her new and very tangled relationships at Nevermore.”

It sounds like the show will have a Chilling Adventures of Sabrina vibe combined with The Umbrella Academy, with magic mixed with a coming-of-age story. If it’s anything like Burton’s other movies (like Edward Scissorhands or Beetlejuice), then it’ll probably only be appropriate for older kids and their parents.

Wednesday has an all-star cast.

The new cast steps into some pretty big shoes.

On June 6, Netflix revealed a teaser of Ortega in full character. The rest of the Addams clan, shown for the first time on August 16, is rounded out by Catherine Zeta-Jones as Morticia Addams, Luis Guzmán as Gomez Addams, and Isaac Ordonez as Pugsley. Christina Ricci is set to play an as-yet-undisclosed character, but Deadline reported she will be a new character and not an older version of Wednesday.

The new trailer offers a chance to see the cast in their full glory. Wednesday stands out as a quite dark spot in a hyper-saturated, vibrant high school — her eighth in five years, according to a voiceover. A bust of Nancy Reagan smiles eerily in the main entrance. When she’s expelled for releasing piranhas into the pool during a water polo practice (hey, they were bullying her brother) her parents Gomez and Morticia finally decide the time has come for her to attend the Nevermore Academy, the school where they met. She soon discovers she has stepped into a “nightmare of mystery, mayhem, and murder”... it’s a perfect fit.

We give this all the snap-snaps....

When will Wednesday be released?

More Like This
'Workin’ Moms' Season 7 Is Reportedly In The Works! Here’s Everything We Know
Exclusive: Three Siblings With Super Powers Protect National Parks In Spirit Rangers
'Squid Game' Is Coming Back For Season 2 On Netflix: Here’s What Parents Need To Know
School Is Back In Session! 'Abbott Elementary' Was Officially Renewed For Season 2

This article was originally published on April 1, 2022