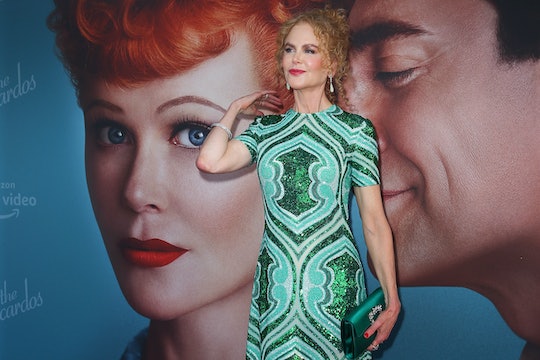 It has been 20 years since Nicole Kidman and Tom Cruise ended their marriage. Two full decades apart. And yet, here she is in 2021 still fielding questions about their relationship. Except this time around, Nicole Kidman has no time for questions about Tom Cruise. She even called one journalist out in a recent interview as “sexist” for trying to draw conclusions between her own previous marriage and the one she portrayed in the Amazon Prime movie Being The Ricardos.

Kidman plays Lucille Ball alongside Javier Bardem as Desi Arnaz in the biopic directed by Aaron Sorkin, which focuses on a difficult week of filming the I Love Lucy show. In an interview with The Guardian, the actress opened up about what it was like filming a married couple who worked and lived together. “This film says you can make an extraordinary relationship thrive and leave remnants of it that exist forever. Yeah, that’s really gorgeous. You can’t make people behave how you want them to, and sometimes you’re going to fall in love with someone who isn’t going to be the person you spend the rest of your life with. And I think that’s all very relatable. You may have kids with them. You may not, but they were very much in love.”

When the interviewer asked her if she was alluding to her marriage to Tom Cruise, Kidman answered with an emphatic “no,” saying, “I mean, that’s, honestly, so long ago that that isn’t in this equation. So no. And I would ask not to be pigeonholed that way, either. It feels to me almost sexist, because I’m not sure anyone would say that to a man. And at some point, you go, ‘Give me my life. In its own right.’”

Since their breakup in 2001, both Cruise and Kidman, who share daughter Isabella and son Connor, have moved on to other relationships. Cruise married actress Katie Holmes in 2006 and they welcomed daughter Suri Cruise that same year, separating in 2012. As for Kidman, she married country singer Keith Urban in 2006 and has been with him ever since, welcoming daughter Sunday in 2008 and daughter Faith in 2011. Both actors have gone on to live full, entirely separate lives over the course of 20 years.

Nicole Kidman shouldn’t be expected to continue covering that time in her life. Good for her for calling those kinds of questions out, sexist or otherwise.