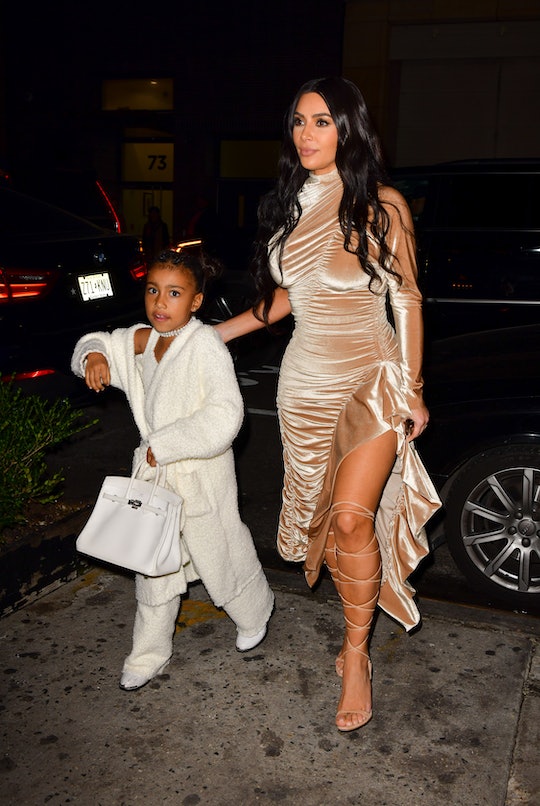 It was really only a matter of time before 8-year-old North West, oldest daughter of wildly famous Kim Kardashian and Kanye West, decided to try her hand at social media fame. Or at the very least, tried to take matters into her own hands. After North and her mom started their own TikTok account, it seems North decided to go live without checking to make sure it was OK. Spoiler alert. It was not OK with her mom at all.

North, who is older sister to 6-year-old brother Saint, 3-year-old sister Chicago, and 2-year-old brother Psalm, recently gave her TikTok followers a tour of her family home for the holidays. The 8-year-old posted several videos with her millions of followers to the tune of “Christmas (Baby Please Come Home)” by Mariah Carey, showing off their enormous Christmas tree and all of the family’s personalized white stockings (including dad Kanye West). She went on to show her lizards, Cheese and Bean, along with their own stocking before adding, “And my mom hates them.”

More video footage followed, with North giving a behind-the-scenes tour of the rest of the house. There looked to be a Sing 2 party happening, complete with about a million balloons and characters from the movie, which North was insisting people “say yes if you want to see it” before she would show anyone.

The tour continued until North went live on TikTok in to see her mom’s room. Kardashian was still in bed, but when she heard North say “Mom I’m live,” she perked up. “No! Stop, you’re not allowed to,” the Skims mogul said. “North, come on. Is she really live?” Kardashian asked another adult, who admitted they didn’t know.

Well, we know. And that’s where the live tour came to an end.

Apart from North’s foray into the world of live streaming on TikTok, her content has been mom-approved to this point. Cute videos of her playing dolls with little sister Chicago, showing off her new pajamas, that kind of thing.

But here’s the thing. Being the daughter of two hugely famous parents, it makes sense that North would want to get in on it all. She just might want to wait for permission, that’s all.