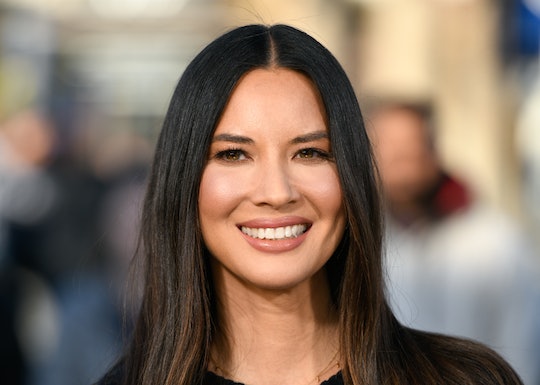 Bernie Sanders would be proud!

Keeping your baby warm and stylish is easy to do with the right accessories. Just look to new mom Olivia Munn for inspiration. The Newsroom actress dressed her infant son Malcolm in cute Bernie Sanders-style mittens for a recent outing that were personally made for him by his grandmother.

The X-Men: Apocalypse actress and boyfriend John Mulaney welcomed their first child together, son Malcolm Hiệp Mulaney, in November 2021. Mulaney announced their son’s birth on social media in December with a photo of Malcolm wearing a tiny blue hat. “Meet Malcolm Hiệp Mulaney. He has his whole life ahead of him,” he captioned the post on Instagram. “He hasn’t even tried seltzer yet. I’m very in love with him and his whole deal. Happy Holidays.”

He might not have tried seltzer yet, but Malcolm certainly pulled off a popular meme from early 2021 with his new look. Munn shared a photo of her baby boy being worn in a carrier on her Instagram Story, sporting little replicas of those warm mittens first made famous by Vermont Sen. Bernie Sanders at President Joe Biden’s Inauguration last January.

According to Munn, her mom made the mittens for little Malcolm. They aren’t just woolen mittens that look similar to Sanders’ own, in fact. They have almost the exact same design in brown and tan, just like the senator himself wore last January in stark contrast to so many other well-dressed, glamorous politicians and celebrities at the event. What a cute gift idea from Malcolm’s grandmother.

Munn previously opened up about how much love and support she received during her pregnancy from other moms in her circle in September. “I’ve been feeling really good and just the outpouring of love and support has been really amazing,” Munn told Access host Mario Lopez. “There’s been a big ‘ole mom tribe that comes up. I’ve heard about it, but they really come up in full force. There’s a really great dad tribe, too. Everyone who comes up is really supportive and it means so much to me.”

This clearly includes her mom. “My mom crochets and knits a lot of stuff,” Munn told People in September. “She makes little rattles or stuffed animal toys already. This is still a new experience for me so to see my mom excited makes it feel a lot more real! I'm really excited.”

If Olivia Munn’s mom is looking for a lucrative side hustle, knitting baby Bernie Sanders mittens wouldn’t be the worst idea in the world.