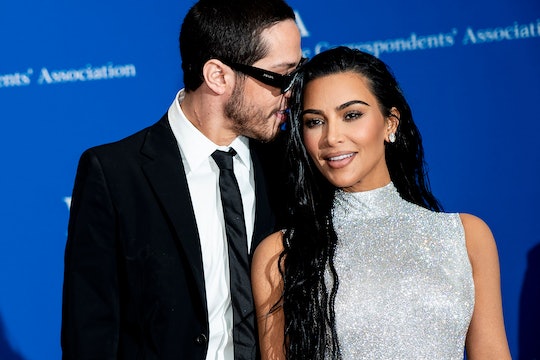 These days Pete Davidson is known for three things: Saturday Night Live, tattoos, and Kim Kardashian. And it seems Davidson’s devotion to The Kardashians star has reached a new level. Over the weekend, fans got a glimpse at the comedian’s newest ink and it sure looks like the initials for Kardashian’s four kids are tatted on his neck.

In photos of Davidson and Kardashian leaving the Fonda Theatre in Hollywood shared by Page Six, the Saturday Night Live star appears to have some new ink on his neck that reads “KNSCP.” Fans have speculated that the letters could stand for “Kim” and her four kids; North, 8, Saint, 6, Chicago, 4, and Psalm, 2.

While some fans have said Davidson’s new ink is a “nice gesture” to be part of Kardashian’s life, others have mixed feelings, calling it “a red flag” or finding it to be a jab at Kardashian’s ex-husband and father of her children, Kanye “Ye” West. “Who tattoos the initials of some other man's kids on themselves after dating their mom for under a year?” one fan tweeted.

Should the speculation about his new ink be true, this is actually not the first tattoo Davidson has dedicated to Kardashian. He also has a “My Girl Is A Lawyer” tattooed on his arm and even branded her name on his chest. “The branding is my name,” the Skims mogul shared during a March appearance on Ellen DeGeneres’ talk show. “The other ones are cutesy things. I think my favorite one, it says: ‘My Girl Is A Lawyer.’ And that one’s really cute.”

The couple started dating in October 2021 after Kardashian hosted Saturday Night Live, but have known each other for years. The earliest and most public date was 2019 when the two attended rapper Kid Cudi’s birthday party while Kardashian was still married to West, whom she filed for divorce from in February 2021.

Since their romance started last year, Kardashian has shared photos of her with Davidson on Instagram and the two just attended the White House Correspondents’ Association Dinner together where they made their red carpet debut. In a recent interview with The Today Show, Kardashian said she feels protective of their relationship. “I do think that I am holding, you know, a little bit more close to my heart on certain aspects of my relationship with Pete,” she said, “and it feels good just to know that, like, we have this connection and we have our little bubble of a relationship world that we live in that, like, not a lot of people know about.”

While Davidson has called Kardashian his “girlfriend” in interviews, he hasn’t shared many details about their romance. He has, however, previously shared that his love language is “try and go as above and beyond as possible” and that certainly seems to be the case with Kardashian.