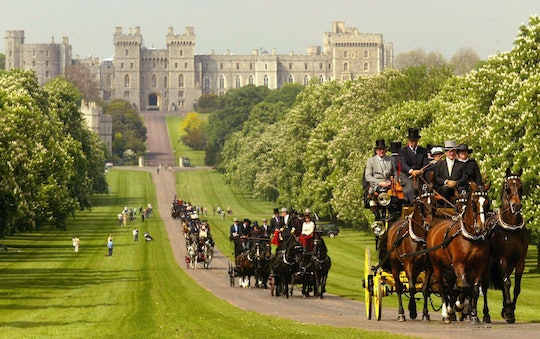 These Photos From The Queen's Apartments In Windsor Castle Are Stunning

Queen Elizabeth II's property portfolio is massive — she gets the honor of living in Buckingham Palace but also gets to vacation in other castles, including Windsor Castle, upon whose grounds Prince Harry and Meghan Markle exchanged their vows in 2018. Windsor Castle is the largest occupied castle in the world, according to the official website of the royal family. While the queen doesn't usually live in Windsor Castle full time, she has spent much of the last year there amid the pandemic. Prince Philip also spent much of the last year there, and he died at home in the castle on April 9 at age 99.

When you see photos of the collection of rooms known as the "state apartments" that form the centerpiece of the castle, according to Royal Collection Trust, you can see why it’s one of the queen’s favorite residences.

The Apartments Are Ornate

Here’s a glimpse of the space:

The Apartments Are Decorated For The Holidays

Christmas is a major event for the royal family, and the apartments are decorated accordingly.

Windsor Castle has about 1,000 rooms, according to Express. It is not only the home to those who are lucky enough to call it home, but it also hosts many major events, both private and public ones, held by the queen. But the castle, which has been continuously inhabited for nearly 1,000 years, is meant to be lived in, according to the royal family's official website. As soon as the queen ascended the throne in 1952, according to Express, she declared that it would be her weekend home and modernized the private apartments, which had become "dilapidated."

Just Don’t Expect To See All Of The Apartments

But people shouldn't expect to see much of the private residences and other personal apartments inside Windsor Castle, according to MSN. This is because the private apartments are "hardly ever photographed" — likely for a good reason. People who live in such a famous and popular castle likely want to keep their privacy, rather than have people peer into their living space (no one likes an uninvited guest).

This article was originally published on June 2, 2018