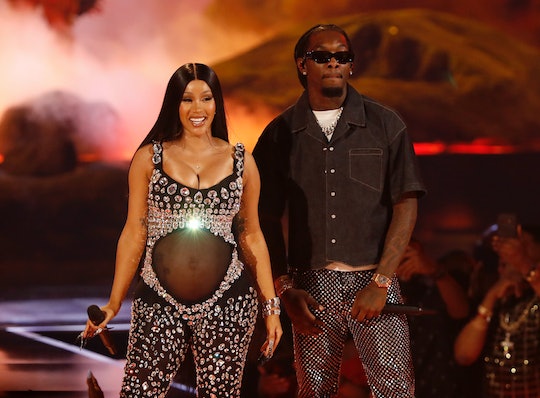 “After I give birth, I’ll probably try artistic because right now, I can’t even cross my legs together or nothing.”

You can expect to see a lot of spins, spirals, and ribbons in Cardi B’s latest venture! The expectant mom got on the mat and tried her skills at rhythmic gymnastics, training with one of the best gymnasts in the sport. And, as it turns out, she may be a natural!

In the latest installment of the rapper’s Facebook messenger and Instagram series, Cardi Tries, Cardi went to the gym with singer and actress Amanda Seales to train with rhythmic gymnast Nastasya Generalova. The 28-year-old rapper, who’s reportedly due to give birth to her second child in September, wanted to try out the sport after her and Offset's 3-year-old daughter, Kulture, expressed interest in gymnastics. The two women also revealed that they, like most of us, had both been watching the gymnastics Olympics competition over in Tokyo.

“I thought it would be a good sport for my daughter,” Cardi told Seales, who shared she was also a gymnast.

“I am not a flexible person,” Cardi added, “however everything that I can do, I’m gonna make sure my daughter do.”

Kulture recently celebrated her third birthday and had a fairytale princess party, coordinated by mom and dad. “Now that she turned three, I'm gonna put her in gymnastics class,” Cardi shared with Seales. “I just want her to be really flexible because being flexible always takes you a long way with everything.”

In the clip, Cardi showed off some twirls and spirals with the ribbon, which impressed Generalova, who is also on the U.S. rhythmic gymnastics national team.

At the end of their practice, Cardi and Seales changed into glittery, gymnastics leotards and performed a routine together using the skills they learned from Generalova. Although they did a great job, the “Up” rapper came to a conclusion about her career in gymnastics. “Maybe the next time I’ll try artistic [gymnastics],” she concluded. “No, no, no, after I give birth, I’ll probably try artistic because right now, I can’t even cross my legs together or nothing.”

The superstar rapper is the host and executive producer of Cardi Tries, a series in which she tries out different challenges while “bringing her positivity and unique style.” You can this rhythmic gymnastics episode, which is the first of Season 2, on Facebook Watch.