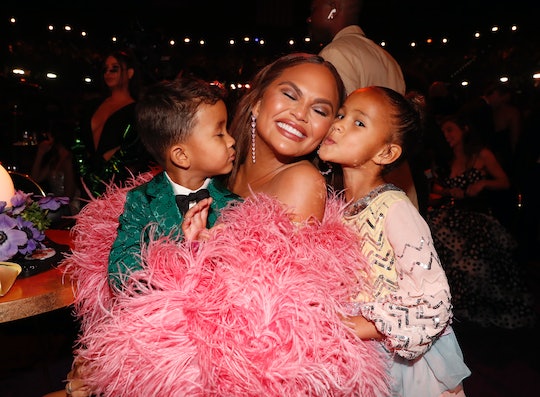 Gabby’s Dollhouse to the rescue!

Chrissy Teigen recently had one of those flip-flop parenting days that can really throw you for a loop. One minute everything was fine, she was taking luminous pregnant selfies and attending a Netflix event with her happy kids. The next, all three of them were sick and she was even “coughing up blood.” So what did she do to find some peace? Curled up on the couch with 6-year-old daughter Luna and 4-year-old son Miles to watch Gabby’s Dollhouse on Netflix. Because sometimes finding a show to watch together really does save the day.

On Sunday, Teigen took to her Instagram to share an unfortunate series of events, beginning with a few pregnancy selfies taken in front of a wall of magazine covers featuring some of her work. In other words, she was clearly having a nice little moment. But that was just the beginning of the story, as she explained in the caption; “this was yesterday. today I have two sick babies and I’m coughing up blood! I love fall.”

While she didn’t specify what sort of illness had befallen her children, she did find a way to get “the gift of some peace and rest,” as she explained in an Instagram Story: streaming the beloved animated children’s series Gabby’s Dollhouse on Netflix.

Gabby’s Dollhouse is one of those remarkably calming, comforting animated series that kids love. Exactly the kind of show that you want to watch if you’re not feeling well, the kids aren’t feeling well, and you all just need to chill out together for a bit. Especially if you are, like Chrissy Teigen, pregnant and unwell.

Teigen has been suffering from acid reflux during her pregnancy, so much so that she wore a special tape around her belly to help manage the symptoms. As she is nearing the end of her pregnancy, it would certainly be a tough day if the kids were sick right along with her. So it’s a good thing she turned to Gabby’s Dollhouse to give the whole family a little downtime to recover and be together. Excellent children’s programming, the gift that keeps on giving.

More Like This
Meghan Trainor Shares Baby News After Dropping Hints On TikTok
Keke Palmer Casually Drops Her Baby's Sex On Jimmy Fallon
Exclusive: Watch How A Group Of Princesses Save The Day In Netflix's New Animated Series
Moms Are Loving Chrissy Teigen’s Instagram Post About Missing The Grammys This Year
What Parents Are Talking About — Delivered Straight To Your Inbox