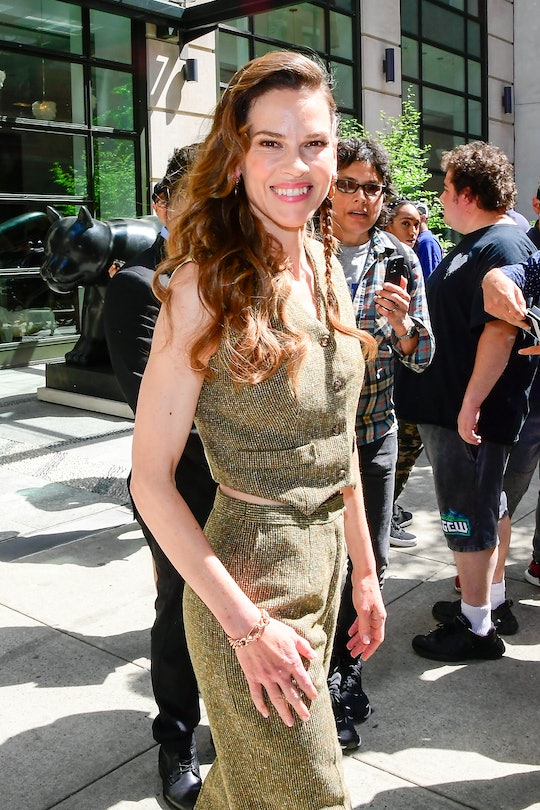 It’s double pumpkins for this mom-to-be!

Hilary Swank recently announced that she is pregnant with twins, but the A-List actress is busier than ever on set for her upcoming TV show Alaska Daily. Between bouts of morning sickness and learning all those lines of dialogue, Swank definitely has a lot on her plate for a first-time mom. But having a baby won’t stop the Oscar-winning actress from taking some time out of her jam-packed schedule to post some Halloween fun on social media. And Swank was all about the pumpkin as she absolutely glowed from the inside out and posed with her puppy and growing baby bump in black and orange holiday-themed looks.

In a recent Instagram post, Swank was all-smiles in front of her make-up chair as she stood for a full body shot to show off her festive ensemble. With a t-shirt that read “My Little Pumpkins” and her cute white pooch dressed in a pumpkin-themed sweater, Swank was definitely excited to celebrate her first Halloween as a mom-to-be.

“#HappyHalloween from me, Pumpkin Moon and my PumpTwins 🤣,” Swank captioned the post. Fellow celeb-mom Mariska Hargitay jumped into the comments section to support her pregnant pal. “Ohhhhh this just made my heart sing!! love you❤️❤️❤️,” she wrote.

It’s great to see the actress enjoying her pregnancy as the Million Dollar Baby star has had to deal with some nasty online trolls who seem to have a problem with the actress having a baby at the age of 48. (Luckily Swank has some pretty loyal friends, like Emmy Rossum, who shut the haters down when they rear their ugly heads).

Swank, who is expecting her double bundles with husband Philip Schneider, always wanted to be a mom. “I definitely would like kids someday. That’s definitely something that I’ve always thought about as a very, very young girl,” Swank revealed at a movie premiere in 2006, as reported by Page Six. “I just love kids and that would be an important thing to happen for me someday whenever the time is right.”

The Boys Don’t Cry star recently opened up about why she waited until now to make her maternity dreams come true. In an interview with Extra!, Swank shared her struggle that many working women can relate to: “having a career and not having the right relationship.” She added, “You know, all the elements need to come together and be right.”

Lucky for Swank, the stars did in fact align, as she managed to land a great guy and also fulfill her wishes to have her own family. With a critically-acclaimed career in Hollywood too, Swank is proving that with some patience, maybe it’s possible to have it all after all.