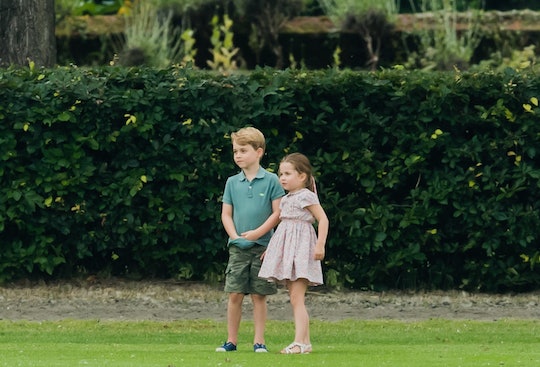 “Most mornings there's a massive fight between Charlotte and George as to what song is played.”

While Prince William stands to one day inherit the British throne, his mornings sound just as chaotic as any other dad’s. Along with getting each of his three children ready for the day, the Duke of Cambridge recently revealed he spends almost every morning mediating nearly the same squabble between two of his three children. In a recent episode of Apple Fitness+’s Time to Walk series, Prince William said most days in the Cambridge household see Prince George and Princess Charlotte fighting over what music the family listens to while going about their morning routine.

“Most mornings there’s a massive fight between Charlotte and George as to what song is played,” Entertainment Tonight reported Prince William said of his family's morning routine. “And I have to, now, basically prioritize that one day someone does this one and another day it’s someone else’s turn. So George gets his go, then Charlotte gets her go. Such is the clamor for the music.”

But while many kids clamor for children’s songs like “Baby Shark,” the Cambridge family’s morning playlist is a bit more sophisticated. According to Prince William, Prince George and Princess Charlotte are big fans of a song Shakira released more than 10 years ago.

“One of the songs that the children are loving at the moment is Shakira’s ‘Waka Waka,’” Prince William said, adding the song was one his children couldn’t help but dance to. “There’s a lot of hip movements going along with a lot of dressing up. Charlotte, particularly, is running around the kitchen in her dresses and ballet stuff and everything. She goes completely crazy with Louis following her around trying to do the same thing.”

Princess Charlotte’s love of “Waka Waka” even reached Shakira herself, who thanked the young royal late Sunday. “I’m so pleased you like my music Princess Charlotte!” the Colombian singer tweeted.

On mornings when dad gets to control the family’s playlist, Prince William said he opted for something a little bit more rock ‘n’ roll, AC/DC’s “Thunderstruck.” “There’s nothing better than, on a Monday morning, when you're a bit bleary-eyed after the weekend and trying to get yourself back into the grind of the week,” Blabbermouth reported Prince William said on his Time to Walk episode. “It absolutely wakes you up, puts your week in the best mood possible, and you feel like you can take on anything and anyone.”

Prince William also loves to play Tina Turner’s “Simply the Best,” a song he said he remembers his late mother, Princess Diana, often singing along to while driving him and Prince Harry to school. “My mother, she'd be driving along, singing at the top of her voice,” Entertainment Tonight quoted Prince William as having said. “When I listen to it now, it takes me back to those car rides and brings back lots of memories of my mother.”

Despite Prince George and Princess Charlotte’s early morning arguing, William noted in the Apple Fitness+ podcast that he was “amazed” at how much his children seemed to have already inherited his family’s love of music and how the family’s morning dance parties help get the day started off on the right foot, according to Town & Country. “It’s a really happy moment where the children just enjoy dancing, messing around, and, and singing,” he said.