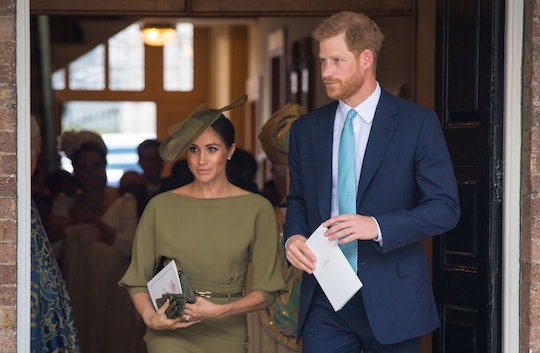 The Duke and Duchess of Sussex are still finalizing their plans.

It’s safe to say that the world is very much ready to see Lilibet “Lili” Diana Mountbatten-Windsor for the first time. Her parents have been protecting her privacy since her birth at the beginning of June, and that doesn’t look to change any time soon. Unless, of course, Meghan Markle and Prince Harry christen Lilibet and share some precious photos afterwards, as they did with their 2-year-old son Archie. As the end of the year approaches, more and more people are wondering whether or not Lili will be christened in London like her brother and father.

They Are Still Finalizing Plans

While there remains much debate in the tabloids about whether or not the Duke and Duchess of Sussex will actually return to the United Kingdom for Lili’s christening, the couple’s spokesperson said in a rare statement to The Daily Mail in October that they are still finalizing plans. Previously a palace “source” claimed that the couple would not be returning to London and would instead christen their daughter at an Episcopal church in California, but their spokesperson called this “mere speculation.”

During Prince Harry’s recent visit to London to unveil a statue of his mother, Princess Diana, alongside his brother Prince William, the Daily Mail reported that he discussed a possible christening for his new daughter. Royal sources explained to the outlet that Prince Harry “told several people that they want to have Lili christened at Windsor, just like her brother.”

When Archie was christened at the Private Chapel at Windsor Castle in July 2019, it was an intimate affair. The Duke and Duchess of Sussex denied media access to the event, which was unprecedented at the time. Only 25 people were in attendance, including the Duke and Duchess of Cambridge, Prince Charles, Markle’s mother Doria Ragland, and Prince Harry’s aunts on his mother’s side. Not Queen Elizabeth, however. If Lilibet is christened at Windsor, Prince Harry reportedly wants Queen Elizabeth to be in attendance, which would be a lovely moment as her great-granddaughter shares her own special nickname.

If Lilibet’s Christening Is In England, It Would Also Be Meghan & Archie’s First Time Back

A royal christening for Lilibet would also mark another special occasion, the first time Meghan returns to the United Kingdom since her final round of royal duties in early 2020. She was unable to accompany her husband when he attended Prince Philip’s funeral in April as she was near the end of her pregnancy, and had just given birth when he returned for the unveiling of his mother’s statue. Lilibet’s christening, which the couple are reportedly comfortable waiting on “until circumstances allow,” per the Daily Mail, would also see Archie’s first return to the country of his birth since 2019.

The royal family’s website has added Lilibet to the line of succession to the throne. She is eighth in line, behind her older brother, her father, and her Cambridge cousins. If she is christened in the United Kingdom, it could well be the first time she’ll be meeting those cousins. And what a treat that will be.

Currently there are still travel restrictions between the United States and United Kingdom, which could make Lilibet’s christening more difficult for the time being.