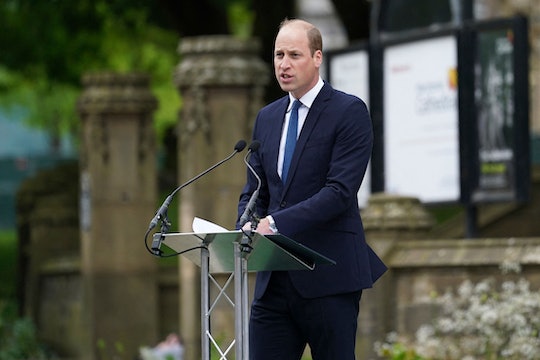 “There is comfort in remembering.”

It has been five years since 22 people were killed at the Manchester Arena in a horrific terrorist attack during an Ariana Grande concert. Five years for people to grieve and mourn and for life to move on in ways that can sometimes feel quite difficult. Prince William understands a thing or two about grief and the passage of time. He understands it better than most. And when Prince William gave an emotional speech about grief at a Manchester memorial, he seemed to get choked up just talking about it. Because, of course he remembers his own loss. Even after 25 years.

The Duke and Duchess of Cambridge were on hand to open a memorial for the Manchester bombing victims on May 10, which was a white halo sculpture featuring the names of the people who were lost in the 2017 attack.

“Catherine and I know that the atrocity’s impact will last a lifetime and beyond, and that the healing process is still on-going,” Prince William said. “We want to assure all of you who are struggling that you are very much in our thoughts.”

He went on to reach out on a more personal level to the people who are missing their loved ones by talking about his own loss, presumably referencing the monumental loss of his mother Princess Diana in 1997 when he was just 15 years old.

“As someone who lives with his own grief, I also know that what often matters most to the bereaved is that those we have lost are not forgotten,” the father of three said. “There is comfort in remembering. In acknowledging that, while taken horribly soon, they lived. They changed our lives. They were loved, and they are loved. It is why memorials such as the Glade of Light are so important. Why Catherine and I so wanted to be amongst you today.”

Prince William has worked hard to keep his mother’s legacy alive through his charitable efforts, his work to end the stigma behind mental health awareness, and unveiling memorials of her like the one in Manchester was made to honor those lost victims. But perhaps he honors his mother most by simply remembering her in his daily life with his family. As his 7-year-old daughter Princess Charlotte wrote in a Mother’s Day card to the grandmother she never met, “Papa is missing you.”

He misses his mother. And he remembers her. There really is “comfort in remembering,” just as he said.

More Like This
Everything We Know About The Cambridge Family's Sweet New Dog Orla
Prince George Has Apparently Known He'll Be King Someday For A While Now
Kate Middleton Explains Why Her Kids Couldn't Attend The Top Gun: Maverick Premiere
Meghan & Harry Celebrated Their Anniversary As A Family Of Four For The First Time