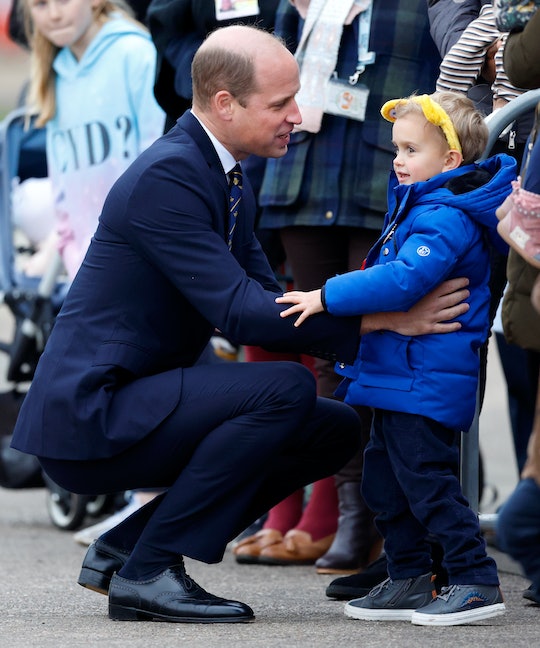 He also gave him a cuddle.

As a dad of three himself, Prince William knows that little moments of approval go a long way for kids. Especially when it comes to things like artwork. So when he told a little boy recently that he would happily display his artwork on his own personal fridge, you know that kid went home on cloud nine. It’s a big enough deal when your own parents put your art on their fridge, but the future king of England doing it too? That’s magic.

The Prince of Wales was recently visiting RAF Coningsby in Lincolnshire for a royal outing when he met 3-year-old Blake Fearnley. Little Blake greeted Prince William with a homemade gift, a picture he had drawn himself of Mickey Mouse. Blake’s mom Laura Fearnley told Sky News that Prince William took the picture and promised little Blake that “he would put it on his fridge.”

That high praise had Blake asking for one more thing; a cuddle with Prince William. “He walked off and then Blake decided he wanted to ask William for a cuddle so he followed him and said 'please William may I have a cuddle' and he did,” Fearnley told Sky News.

Blake’s artwork will most likely have to share precious fridge real estate with Prince William’s own three children, 9-year-old Prince George, 7-year-old Princess Charlotte, and 4-year-old Prince Louis. Especially now that they’ve all started at a new school where it sounds as though artwork will absolutely be getting sent home with students on the regular. And we know that the royal family loves to hang out in their kitchen in the mornings, fighting over which Shakira song they want to play with a lot of “hip movements going along with a lot of dressing up,” Prince William said in 2021. “Charlotte, particularly, is running around the kitchen in her dresses and ballet stuff and everything. She goes completely crazy with Louis following her around trying to do the same thing.”

With all that running around going on, here’s hoping Blake’s artwork doesn’t get knocked off the fridge on a wild royal morning. That would be a shame.