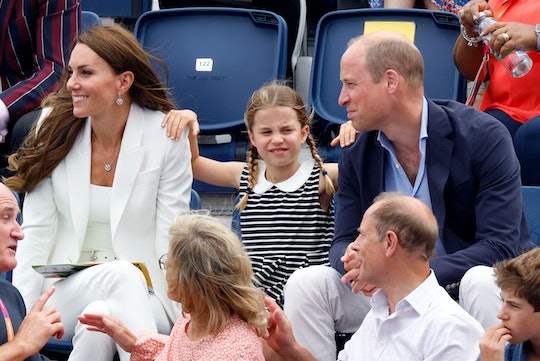 Princess Charlotte Had A "Lovely" 7th Birthday, According To Her Parents

A birthday that apparently included a new pony and mini-pizzas made by her mom.

Princess Charlotte seems like she’s having a pretty great year. She was an absolute little star at the Platinum Jubilee to celebrate her great-grandmother Queen Elizabeth’s 70 years on the throne. Not in the same way her 4-year-old brother Prince Louis was a star with his hilarious behavior, of course. Instead, the 7-year-old was a true model royal. Just as she was at the Commonwealth Games with her parents for her first solo outing. Perhaps it all comes down to her being one year older and wiser. In fact, her parents, the Duke and Duchess of Cambridge, said that she had a “lovely” birthday in their message to some of Princess Charlotte’s well-wishers.

Kate Middleton and Prince William sent out thank you cards to royal fans who reached out to wish Princess Charlotte a happy birthday in May and some recipients shared the sweet notes on social media. “Thank you for the kind message which you sent for Princess Charlotte’s seventh birthday,” the card, which also featured a photo of Princess Charlotte sitting in the grass, read. “Princess Charlotte had a lovely birthday and your message was greatly appreciated by the Duke and Duchess of Cambridge who send you their very best wishes.”

While Middleton and Prince William did not share how Princess Charlotte celebrated her birthday, royal insiders told Us Weekly that she celebrated the day with a rainbow unicorn birthday cake and a very impressive birthday present: A pony — an actual for real pony to ride and everything. “The gift Charlotte wanted more than anything was a pony,” a royal insider told Us Weekly. “She has been taking horse riding lessons for over a year and is obsessed. William and Kate know that her passion for riding isn’t a [phase] and finally agreed to buy her one.”

No wonder they say she had a lovely birthday. Who wouldn’t if they got their very own pony? Plus her mom, future Queen Consort of England, made a bunch of fun food for her and her friends to eat at her birthday party at Kensington Palace. “Kate made all the food herself — mini pizzas, burgers, sausage rolls, hot dogs, fruit wands, sandwiches, multicolored cupcakes and ice cream for everyone to tuck into,” the source told Us Weekly.

Oh to be a young princess living the best of both worlds. Ponies and mini pizzas for your birthday. Perfection.