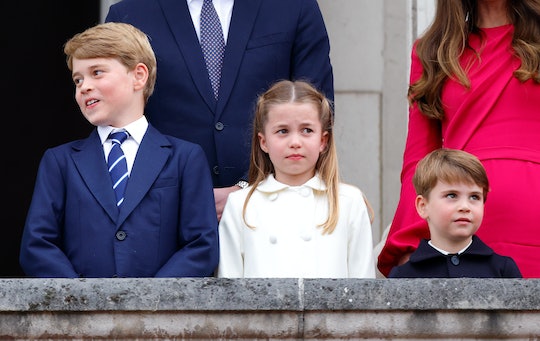 Yes, it is true that 4-year-old Prince Louis stole the show at the Platinum Jubilee with his antics, charming everyone around him with his bubbly nature. Everyone, it seems, except his older sister Princess Charlotte. When joining other members of the royal family for the various events to celebrate her “Gan-Gan’s” 70 years on the throne, Princess Charlotte made it clear that she would brook no bad behavior. From either of her brothers, even the one who is going to be king someday.

While her younger brother Prince Louis has not attended many events, Princess Charlotte is an old hand at these sort of things. In fact, she’s long since perfected her royal wave simply by copying her great-grandmother’s own trademark wave, and she’s even been known to dip into a flawless curtsy when needed. Which says to me that she has set some pretty high standards for public royal behavior; although it bears noting that she herself has not always been perfect in public. Who could forget her tantrums as a toddler in Germany, or her little lecture to members of the media at Prince Louis’ christening that they were not welcome to join the event? And don’t even get us started about her sticking her tongue out whenever she feels the need.

Times have changed though. Because now Princess Charlotte is the ultimate royal taskmaster.

She’ll decide when to stop waving, thank you.

When Princess Charlotte joined her brothers, mom Kate Middleton, and her grandmother Camilla Parker-Bowles in a carriage on the way to Buckingham Palace, everyone was smiling and waving. Especially Prince Louis. She decided she’d had enough waving and demurely put her hands in her lap. When Prince Louis continued, she reached over and demurely put his hands in his lap too. Enough is enough, it seems.

You’re not king yet, George.

On Sunday, the Cambridge kids were clearly starting to fade after a full weekend of activities. But still Princess Charlotte was keeping a weather eye on her brothers. Even 8-year-old brother and future king Prince George. When he leaned a little on the balcony railing, she reached out to move his hand and said, “arms down, George.” And what’s even more amazing; he did as he was told.

Keeping Prince Louis in check is a full time job.

Sitting with the rest of the royal family and watching the Platinum Jubilee parade, Kate Middleton was having a heck of a time keeping her youngest in his seat. And he was clearly getting on his sister’s last nerve with his antics. As Prince Louis looked like he was ready to jump ship, Princess Charlotte was busy trying to make him sit down. And when he dared put his leg on her, she brushed it away like it was a fly. Decorum, please.

Showing them how it’s done.

Princess Charlotte gave a little lesson in how to have fun while also behaving herself when she joined her parents and older brother Prince George in Cardiff, Wales, where she lead a local orchestra in a rendition of “We Don’t Talk About Bruno” and had a grand time of it.

Unfortunately, Prince Louis wasn’t there to follow her example. And probably wouldn’t have anyhow.