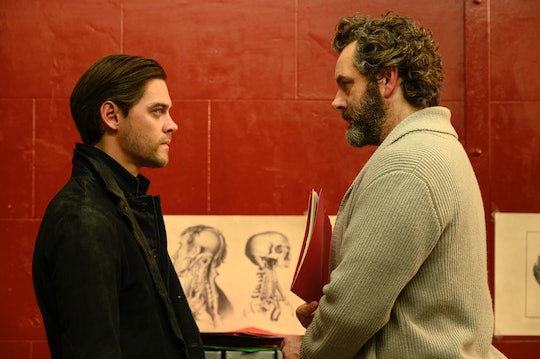 The show’s star Tom Payne used a true crime story to help him craft his character.

Michael Sheen and Tom Payne play an unusual father and son in Fox's Prodigal Son TV series: one is a criminal psychologist while the other is a prolific serial killer. Payne's character Malcolm Bright is on the right side of the law, but he finds himself drawn back into his dad Martin Whitly's orbit when he needs help solving a series of murders. It's a compelling hook for a series, and a thankfully fictional one; if Prodigal Son was based on a true story, you'd already have listened to the podcast about it. The show, which ended in May 2021 after two seasons on Fox, wasn't inspired by real events — but it did come about through some character-based thought experiments.

What Was The Inspiration For Prodigal Son’s Premise?

During a TCA panel for Prodigal Son in August 2019, executive producers Sam Sklaver and Chris Fedak revealed how they came up with the show's premise. "Chris and I were really just playing around with characters and what makes them interesting on TV," Sklaver said, as reported by Deadline. "We were wondering about parents and how they can affect children. What if your father was a serial killer — but also a really good dad?"

That gets at the heart of Bright's dilemma on the series: His loving father turned out to be a monster, leaving him with conflicting feelings about his upbringing. He still feels a connection to his dad, but he has to contend with the reprehensible things Whitly has done.

Inspiration for Prodigal Son came from multiple places. Sklaver also cited the protagonist of the series House as a guide, because Dr. Gregory House similarly dealt with ongoing trauma but didn't lose audience investment. Fedak added that while House was chiefly concerned with diagnosing diseases, Prodigal Son keeps the focus on psychology; in his mind, the series melded Sherlock Holmes with Freud. Ultimately, however, family was the central theme. "We will have cases in the show," Fedak said. "We will have crimes and we will have mysteries. But it's about the family."

Is The Prodigal Son Show Based On A Real Story?

While the initial idea for the show didn't come from a true story, star Payne did look to real life when crafting his character. During the Summer 2019 TCA press tour, he explained that executive producer Sarah Schechter tipped him off to a real story similar to Bright's, according to CinemaBlend. Melissa Moore was just a teenager when she found out that her father Keith Hunter Jesperson was a serial killer known as the Happy Face Killer, a man who had murdered at least eight women and possibly more. Moore told her story in the podcast Happy Face, and she went on to become a writer and TV crime correspondent, per A&E.

Moore's experience gave Payne insight into how someone like Bright might be feeling, though the situations weren't exactly the same. He cited the podcast as "really helpful," according to CinemaBlend, saying, "[Happy Face is] really hard to listen to and made me cry many times, because there's a lot of pain and hurt there. And the character in [Prodigal Son] is in pretty much the same position and has a lot of walls up, but is intent on trying to understand his father and the similarities that may or may not exist between them."

The show may not be ripped directly from the headlines, but there is real life precedent for this kind of situation, as surprising as that may be.

This article was originally published on Sep. 24, 2019