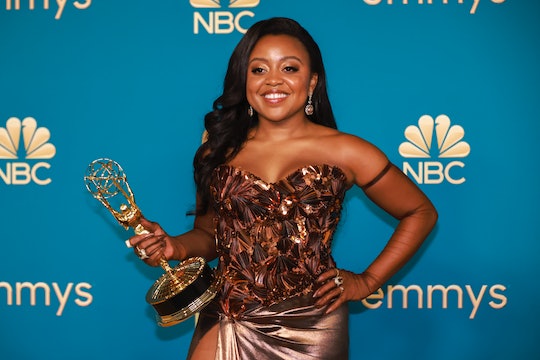 Quinta Brunson’s recent Emmy win is not only celebrated by adults but the students of Abbott Elementary as well! To celebrate, the Emmy-winning Abbott Elementary star and creator recently received a heartfelt, handmade card from one of her young co-stars and shared a photo of it on Twitter.

“Congratulations Ms. Quinta B,” the front of the card read. Inside, the child wrote, “To Ms. Janine, Congrats on winning the best comedy writer award as a Emmy. Thanks for having me on your show. I hope you win more Emmys.” Brunson, who plays an optimistic second-grade teacher named Janine Teagues on the show, put a xoxo emoji over the kid’s name.

“Yeah I love my job,” she tweeted alongside a picture of the card.

The mother of the child actor who made the card for Brunson hopped under the comments and said Abbott Elementary is pretty much his life. “That card is from my son,” she wrote. “He's homeschooled due to his work schedule. So being on Abbott is pretty much the only school life he knows, so yes Mrs. Barbara and Ms. Janine are real teachers to him.”

Needless to say, Miss Teagues is adored by her kids on and off the screen.

Abbott Elementary, which was primarily inspired by Brunson’s own mother who was a school teacher in Philadelphia, swept the Emmys this year, giving Brunson her first Emmy award on Monday night. Brunson is the third Black person and second Black woman to win an Emmy for writing for a comedy series after The Bernie Mac Show’s Larry Wilmore and Master of None’s Lena Waithe.

Brunson’s Abbott Elementary co-star Sheryl Lee Ralph, who plays a wise kindergarten teacher named Barbara Howard on the show, won Best Supporting Actress in a comedy series, making her the second Black woman ever to do so. “To anyone who has ever, ever had a dream and thought your dream wasn’t, wouldn’t, couldn’t come true, I am here to tell you that this is what believing looks like,” she said in her inspiring acceptance speech.

While the cast, kids included, is surely still in celebration mode after the Emmys, school will officially be back in session when Season 2 of Abbott Elementary premieres on Sept. 21.

More Like This
Candace Cameron Bure's Response To "Traditional Marriage" Backlash Is Also Getting Dragged
Chrissy Teigen Credits Popular Animated Kids' Show For Giving Her "Peace & Rest"
"Corn Kid" Handed Out Over 40,000 Cans Of Corn At A Food Bank Ahead Of Thanksgiving
Kate Middleton's First Tiara Moment As The Princess Of Wales Honored Princess Diana