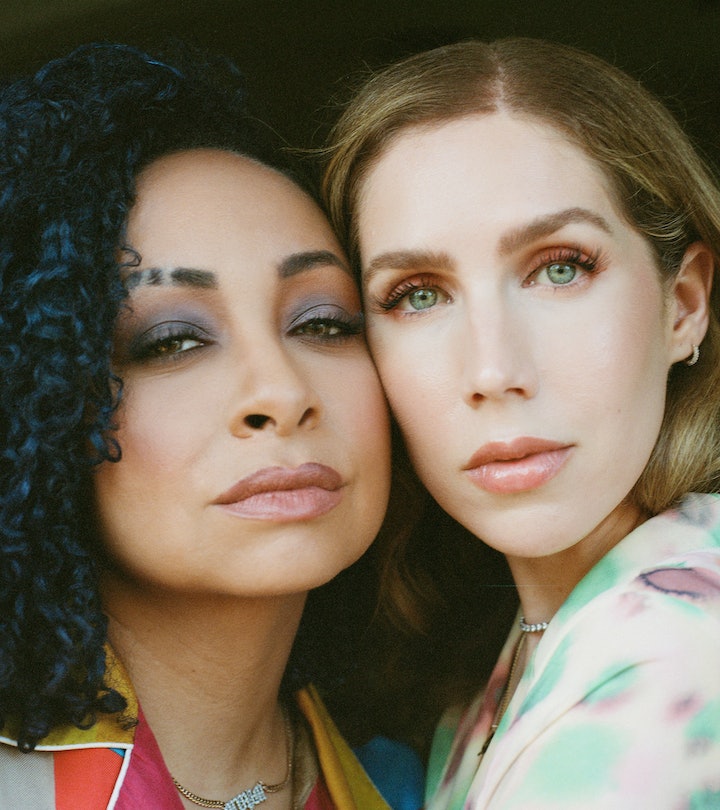 Raven-Symoné and Miranda Pearman-Maday are each other’s LGBTQ+ icons.

There’s something magical about Raven-Symoné and Miranda Pearman-Maday, two women in love, who met at a karaoke night Raven was hosting at a West Hollywood gay bar back in 2015 and married at Debbie Allen’s house in the midst of the pandemic.

“That’s a great intro,” says Miranda, “Here’s a queer witch who happens to be married to Raven.”

In the aughts teenage sitcom That’s So Raven, Raven played one version of a witch — a young psychic fumbling through her efforts to bend the future to her will — and a new generation of kids know her as the witchy mom of Raven’s Home. In real life, Raven’s wife Miranda is a trained birth doula, who has also worked as a social media manager, and was the creative force behind the married couple’s new YouTube channel, 8PM, in which the Pearman-Maday family lets fans in on the rituals of their playful domestic world. In a series called “Kitchen Witches,” Miranda sets an intention and lights a Diptyque candle before attempting to remake the almond flour chocolate chip cookies that, on first go-around, made Raven gag.

“I'm used to being in the family space, but Miranda really helped me to understand that I am a 36-year-old human who needs to grow up,” Raven says. The couple is Zooming from a loveseat in their home, seated with their knees facing each other. Miranda sports bohemian neutrals — Santa Barbara vacation vibes — and Raven wears a sweatshirt that says MARRIAGE in Gothic script, her hair shaved close and radiantly dyed in Pride flag colors. The two are winding down from a Juneteenth celebration at Los Angeles’ Hollywood Bowl, where Raven was a featured celebrity.

“Our channel has allowed me to be more of myself and really put the person I am when I wake up on film,” she continues. “No weave, no makeup. I've normally just put on a mask when entertaining people.” And 8PM does feature moments of real candor, including conversations about body image, and an episode in which Miranda pierces Raven’s ear on camera with a little numbing cream and no supervision, ‘90s girly punk style.

“Raven and I have both had to play both maternal and paternal roles at times, in caring for people, and now we do that together, birthing creative projects,” Miranda says. “Aside from our YouTube channel, we have a production company in very early stages. I think if we were to stay in the analogy of a pregnancy, we have an embryo.”

As for whether they plan to start a family in the literal sense, they say, “We’ve already started our family.”

“When it comes to us bonding and creating a foundation, we’re already there,” says Raven. “When it comes to the traditional way of saying, ‘starting a family,’ we haven’t yet. The good thing about our relationship is that there’s no mistakes. There’s no, ‘Oops, I’m pregnant.’ It’s definitely a concrete decision. When we do decide to start, we will have built a nest that we feel is good for offspring of any kind.”

It’s a frightening time for LGBTQ+ families, who, on the one hand, have never been more visible or more celebrated, but who, on the other hand, face constant new threats to their rights, well-being, and dignity. The legal aspect of the couple's marriage has been a roller coaster of joy, fear, and ambivalence.

“The process of going to get our marriage certificate, and signing that document… it was so great. But at the same time, it's a piece of paper that is also issued to you by the government — the same government that makes people like us fearful that their marriage could be taken away from them, or that they won’t always have the permission to do so. I understand how important that recognition is and I want it…”

“We bought into it,” Raven chimes in.

“But at the same time, what really matters is the day to day, and the commitment. And no one can tell you that your relationship, or your partner isn't valued or important. That's what matters and no one can strip that away, no matter what.”

“We really focus on what we want to do as a partnership,” says Raven, “as a couple in love, and as human beings on this planet.”

Right now, they are focused on living as authentically as they can. In March, Raven made headlines when she walked off the set of Raven’s Home in protest of Florida’s Don’t Say Gay bill, which bans the discussion of sexual orientation or gender identity in classrooms for kindergarten through third grade. She says the call to action came from the show’s executive producers, who surprised her by crashing rehearsals and explaining that other companies were taking a stand. “So we sat there and we weighed the options. If our mother company doesn't back us, they can sue us for walking out. If they do back us, that's awesome. But at the same time, we were just living in a space of, we didn't care what happened because we were standing up for what was right in our eyes.”

The company had faced criticism for not publicly criticizing the legislation before it passed. According to Raven, Disney believes in the power of relatable content, and recognizes “how important it is to embrace all cultures, all lifestyles that could affect the younger generation in any way.” “Disney itself has gone through such a transformation from the time that I started That's So Raven, [and] from the time of their inception to now,” she says.

Does she take any credit for the evolution, as one of the Disney Channel’s first stars to come out?

“It had nothing to do with me, girl,” she says. “I'm a dust bunny in the middle of the ponds. I know my place in the business aspect. They love me, but they're like, ‘OK, Raven's gay. We love her. Bye.’”

The couple’s YouTube channel, Miranda explains, gives Raven another opportunity to be her truest self. “People thank her regularly for just being herself,” she says, “the non-Raven-Symoné or Raven Baxter version that so many people love.”

“It’s been a learning curve for me,” Raven says, “Because, since I was 3, I’ve been regurgitating a man’s interpretation — let alone a white man’s interpretation — of females, kids, and all that. [The YouTube series] is helping me understand human emotion and interaction a lot more. I’m breaking walls down in myself and learning who I am personally, not just the characters that I played all my life.”

That might surprise fans who have grown up with Raven, watched her avoid the tragic pitfalls experienced by other child stars, and chalked it up to her innate self-assurance. But she attributes her success to an unlikely source.

“I always say that my gay self saved me,” she says. “A lot of people ask why I didn’t turn out like any of the other people in my position in Hollywood. As much as I attribute that to my parents, I also attribute it to the fact that the gay person on the inside of me kept saying, ‘Nope, Nope, Nope. You can't do that. You can't do that because I haven't lived my life yet. You have to come out before you can do anything.’”

With such clear ideas about how they can live with purpose, it would be easy to assume that Raven and Miranda built their foundation upon role models they admired in their youth. But the lesbian couple were quick to point out that the phenomenon of visible role models for the LBGTQ+ community is incredibly new.

“I always say that my gay self saved me.”

“When people ask me that question, I [usually] go through the script of what you’re supposed to say to make [everyone] feel good,” Raven says. “But honestly, growing up, I didn’t have any person really sit in front of my face and make me feel comfortable enough to be me. The person I always looked up to was the version of myself I knew I wanted to be later. So, I’ve had to live in the future more than in the now, I guess you could say. I lived toward the person I wanted to be, and found the real role models I needed as I got older, like Miranda and so many people in the LBGTQ+ community.”

“Together,” Miranda adds, “we get to be both the cool creatives and the wise individuals we know we are. That’s really exciting. And so indicative of how we would raise a little being together — or maybe just a plant or a dog.”