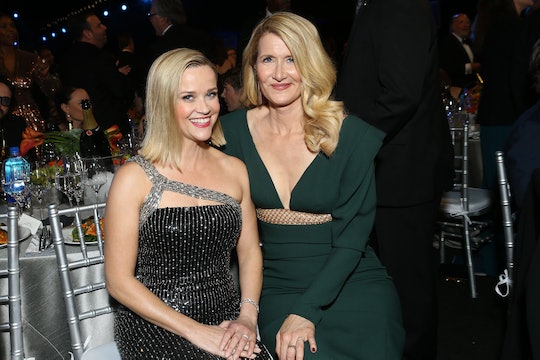 Reese Witherspoon & Laura Dern Went To The 2021 Oscars Together — #GirlGang

The stars made an adorable entrance together

In a throwback to attending prom with your bestie, Reese Witherspoon and Laura Dern went to the 2021 Oscars together and shared a sweet video from before the show. The Big Little Lies co-stars have been spotted hanging out at past award shows together, so it was a treat for fans to see them paired up once again.

Before they headed to the Academy Awards, the stars shared a sweet moment that made its way to Twitter. “I’m so excited my date is finally here,” Witherspoon said in a video from before the awards. “She was a little bit late, but here she is!” Dern replied by calling her pal Reese “the best date in town.”

Witherspoon and Dern found their way to fast friendship after being introduced to one another back in 2011 by a mutual friend in front of a restaurant in Santa Monica, CA, according to The New York Times. Since then, they have gone on to work together on a couple of fun projects. In 2014, the two played a mother and daughter in the film Wild, roles for which they both received Oscar nominations, and later starred as frenemy moms in the HBO series Big Little Lies.

Reese Witherspoon and Laura Dern hit the 2021 Oscars together

But even outside of their professional connections, the two movie stars have formed a very strong relationship. Their families have grown very close, as they told the Times. “We love each other’s families. I was just in London and my son sprained his ankle and Reese texted me: Did I need anything? Or, when Reese was away, I got to have dinner with her daughter,” Dern told the outlet.

“On Mother’s Day we were with our mothers and our kids, and her mother was telling us stories about old Hollywood. Our daughters go out to lunch and dinner and talk, even though they’re just teenagers. It’s nice for them to have a place to talk about their shared experiences as children of actresses, children in show business,” Witherspoon shared in the same interview.

It’s clear that even years after filming together, the friendship is still going strong. And who better to attend a big event with than a bestie who knows you? Cheers to that, ladies!

More Like This
'Hocus Pocus 2' Officially Has A Release Date To Look Forward To
Kristen Bell Just Hinted That 'Frozen 3' Is Maybe (Hopefully!) In The Works
Here’s What The Voices Behind The Characters Of Lightyear Look Like In Real Life
Emma Thompson Shotputs A Child As Miss Trunchbull In The Matilda Musical Trailer