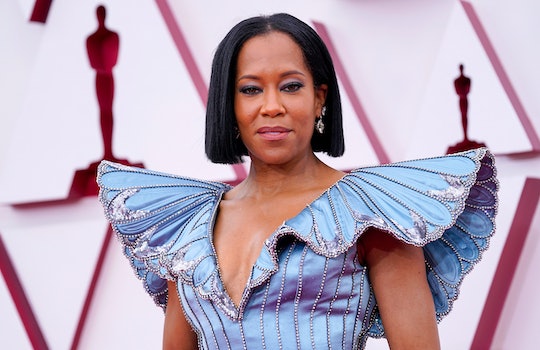 Regina King At The 2021 Academy Awards: “I Know The Fear That So Many Live With”

“And no amount of fame or fortune changes that.”

During her captivating opening monologue, Regina King reflected on the George Floyd verdict at the 2021 Oscars, reminding people at home about the larger issues happening outside of Hollywood. Days before celebrities took to the red carpet to celebrate the biggest night in movies, a jury found former Minneapolis police officer Derek Chauvin guilty of all counts in the murder trial over Floyd’s death last year.

“It has been quite a year, and we are smack dab in the middle of it,” King said during the opening monologue, referring to a number of things, like Chauvin’s verdict and the current coronavirus pandemic. “We are mourning the loss of so many, and I have to be honest, if things had gone differently this week in Minneapolis, I might have traded in my heels for marching boots.”

The One Night In Miami director acknowledged that talking about Floyd or the Black Lives Matter movement so early in the show might not be what some viewers at home were expecting. However, she cited her son, Ian Alexander Jr., as her reason for speaking out. “Now, I know people at home want to reach for your remote when you feel like Hollywood is preaching to you,” she said. “But as a mother of a Black son, I know the fear that so many live with, and no amount of fame and fortune changes that.”

“But, tonight, we are here to celebrate,” she continued. And that’s exactly what she did by presenting the first award of the night and kicking off the 93rd Academy Awards.

Needless to say, viewers at home were impressed by King sharing such powerful words on such a huge platform.

While she might have made a note to celebrate and not mourn, King’s opening monologue made a very powerful and important point. While Los Angeles’ Union Station was filled with celebrities in designer clothes, at the end of the day, these celebrities are parents, activists, and people who are impacted by the world around them.