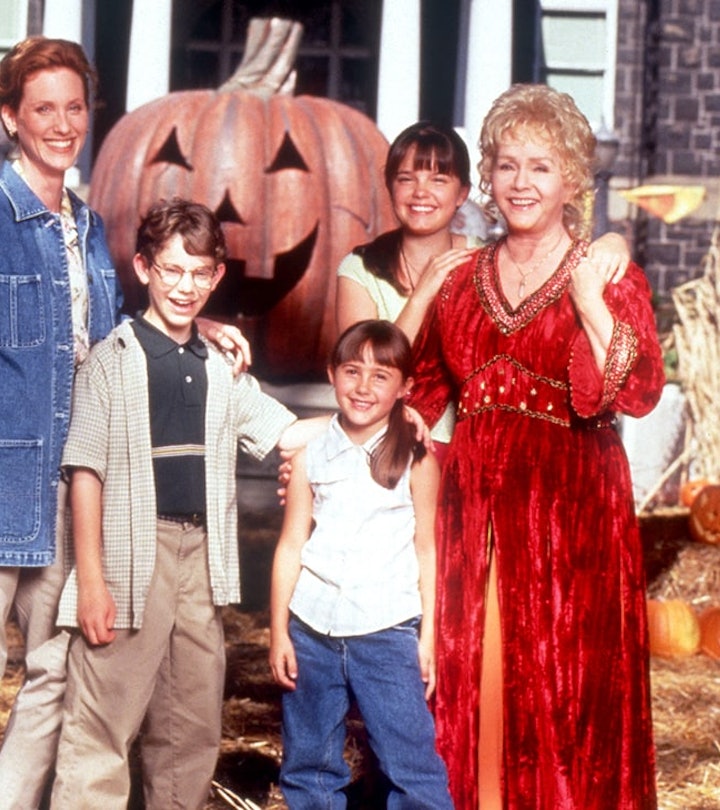 It doesn’t feel like fall until we’re back in Halloweentown.

As a former witch-obsessed girl, I adore all things magical. From Glenda the Good Witch to Sabrina The Teenage Witch, nothing even remotely charmed escaped my attention. And when Disney Channel released Halloweentown in 1998, 5-year-old me was hooked. A gigantic lantern? Undiscovered powers? Debbie Reynolds in her glamorous red velvet robes, leading family of powerful female (and one reluctant male) witches? Pure delight! But now that I’m a mom myself, I wondered: How does Halloweentown hold up? Is it a nostalgic Halloween film like Hocus Pocus that I should introduce my kids to, or is it better avoided — fond memories be damned. I rewatched Halloweentown as a mom, and here are my thoughts.

Kimberly J. Brown was perfectly cast as Marnie (Return to Halloweentown made a big mistake re-casting her, as much as I love Sara Paxton). But what sticks out to me the most is how perfectly she nails the Older Sister Energy.

“I’m 13. I’m practically a grown-up. I’m certainly old enough to make my own choices,” Marnie says, and, um, LOL. As a mom, I’m rolling my eyes a little, but as an older sister myself? It’s 100% on point. I mean, you already ask us to babysit our little siblings, so why can’t we make our own choices, too? Seriously, let this girl go trick-or-treating!

She also is full of sarcastic wit that is still so entertaining. When she flops on the couch and says, “Hey look, I’m a potato now. Are you happy now? Maybe I’ll put down some roots in the carpet,” I’m cackling all over again. It’s perfection.

Like all good older sisters, she does behave (albeit frustratingly) — then goes on to take charge of the situation. She spies on her mom and grandma to discover that she is a witch, then sneaks out of the house. Typical teenage behavior. But telling her younger siblings to stay home? Typical responsible older sister behavior! And good thing she did, too — an evil warlock would have taken over Halloweentown if she didn’t listen to her older sister intuition.

The magic isn’t too cheesy.

It is a Disney feel, but the magic in Halloweentown still feels authentic. Marnie says, “I’m a Wiccan” when she tries on her witch costume, and she’s also knowledgable about hieroglyphics and occult history, showing that her curiosity about witches goes way beyond a typical black-hats-and-broomsticks-level of magical interest. The spells have an authentic ring to them, and the dashing of stereotypes all lead to a movie that is great for kids without feeling too cheesy for adults, which I can appreciate. Even the talking, taxi-driving skeleton named Benny is a cute addition.

Sophie is so much creepier than I remember.

Sophie stares out the window whispering, “someone’s coming” in a chilling, Sixth Sense kinda way at the very beginning of the movie. She only gets creepier from there, literally making objects float with her mind — which is not something I would want my kid to be able to do, BTW.

Despite Marnie being the older sister, Sophie has a power all her own, an ability to remember and recite magical spells from heart, and a belief in the powerful. Halloweentown would not be saved without her.

Debbie Reynolds is a feminist icon.

As a kid, Grandma Aggie reminded me of my own grandmother. Watching again, it’s simply delightful to watch Debbie Reynolds in this role. Passing out candy before bedtime, decorating the house for Halloween, cuddling up with bedtime stories. She is magic and fun and full of surprises, with a kind word for all. “Being normal is vastly overrated,” she says, and it’s so true.

She’s beloved by neighbors, powerful, and independent in her own right, making her a powerful feminist icon who uses her powers for good, unlike the Sanderson Sisters from Hocus Pocus. She doesn’t let anyone — especially a man — get in the way. Aggie Cromwell definitely deserves a spot on the witchy hall of fame (or at least her own Halloween costume).

October isn’t the same without Halloweentown.

From the first Jack-o-lantern scene with the creepy music, ghost decorations flying through the air, and trick-or-treaters running haphazardly through the neighborhood, it’s easy to see why Halloweentown became a campy cult-classic film. Halloweentown had flying buses before Harry Potter, and a magic witch bag a la Mary Poppins-style. But instead of feeling like a cheap knockoff, it simply adds to the legitimacy of the movie — this is a magic world that feels deliciously familiar, like the smell of chocolate chip cookies in your mom’s kitchen.

Halloweentown is one of those rare Disney Channel movies with genuinely talented child actors that still warrant a chuckle with their quick wit and natural talent. You don’t feel like you are watching a highly stylized, overly saturated, shiny kids’ film. It feels like trick-or-treating around the neighborhood with hand-me-down costumes, with your dad trailing behind with his clunky video camera, and your mom checking every piece of candy for anything expired. In other words, it gets to the spirit of the spooky holiday, making it a timeless addition to your holiday movie-watching tradition.

It doesn’t feel like fall until we’re back in Halloweentown, with its gigantic Jack-o-lantern and eclectic group of witches, monsters, and creatures of all kinds wandering among the hay-strewn streets. It’s a dose of autumn, a shot of serotonin right to the brain, and I absolutely love it.

It would do my three boys some good to watch the kind-hearted, funny, and strong female witches in Halloweentown, and I can’t wait to watch it with them again and again.

More Like This
Marcel The Shell Is Officially An Oscar-Nominated Movie Star
Watch An Exclusive Sneak Peek At 'The Amazing Maurice'
Marcel The Shell Is Heading To The Oscars!
Pixar’s 'Turning Red' Is Nominated For An Oscar — Here’s How To Watch It Right Now
What Parents Are Talking About — Delivered Straight To Your Inbox