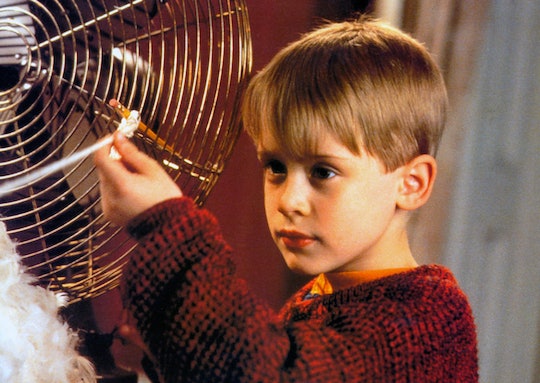 I Rewatched Home Alone As A Mom & I’m Still #TeamKevin

And I’ve never felt better about my own parenting...

As a kid growing up in the early 1990s, Home Alone was everything. There was no facet of the holidays or pop culture in general that could escape references to Macaulay Culkin shrieking with hands on his cheeks. The movie was an instant classic, and became an annual favorite for families all over the world every Christmas season... but, for me, there was probably a 25 year gap between watching as a kid and then as a mom.

When I sat down to watch with my own kids (now just about the same age as Kevin McCallister), I was at once familiar with the story but had largely forgotten a lot of the specifics. Here are a few things that stood out to me...

The movie is far more clever than I remembered

I’m not just talking about the ingenious horrors Kevin concocts to defend his home (more on that in a bit) — the movie is structured in a way that provides foreshadow, logic, and (some) believability, and a lot of that happens in the first sequence of the movie, where Kevin and 14 relatives are all crowded in one house getting ready for a big trip. One of the first lines of the film is Kevin’s dad, Peter, scolding Kevin for leaving his Micro Machines on the floor: “Aunt Leslie stepped on one of them and almost broke her neck.” Of course, this is exactly one of the booby traps Kevin will later set for the robbers. Lots of other elements of Kevin’s various future traps and schemes — a life-sized Michael Jordan cutout, Buzz’s tarantula, and even an allusion to Kevin being crafty and clever when it comes to making things (in this case Christmas ornaments out of fish hooks) — are seen early in the film, long before they’re weaponized.

There’s also good set up even in the early scenes as to how Kevin, realistically, could have been left home alone for as long as he was. Take the picture above. After Kevin and Buzz get into a fight, milk spills on the families’ passports and boarding passes. In cleaning up, Peter accidentally throws one, labeled “Kevin” in the trash, both foreshadow and a plausible reason no one at the airline told them “We have 11 tickets but only 10 passengers: where’s Kevin?” Other details like that reasonably explain how Kevin was left home alone, why no one could get in touch with him (downed phone lines), and why he felt he couldn’t go to the police (inadvertently shoplifted a toothbrush and thought he’d get in trouble). Pretty much anything that seems like an off-handed comment or random set design will come back at some point in the film.

A lot of the time, when I’ve rewatched family movies from my childhood, I see it through a parent’s eyes. This means I change narrative allegiance and identify not with the child protagonist, but with the adult who, though they seem like an antagonist to the kid, is usually just parenting.

Not in Home Alone, though.

Kevin, while sometimes a little bratty, is a completely reasonable kid! (Honestly even the brattiness is age and situationally appropriate.) Before being sent to bed without dinner (which ultimately is what causes him to be left behind), what did the kid do that was so bad? Ask for help packing his suitcase? (He’s 8!) Request a slice of cheese pizza? (Who wants olive?! Gross!) Bemoan the idea of getting peed on by his cousin (who seems to delight in the fact that he’s absolutely going to pee on Kevin)?

Look, as a parent I get that things can get hectic with a house full of extended family, and you may be short with your kids (we’ve all been there) but there’s kind of a limit, right? And every member of the McCallister family has far exceeded it. I fully expected to go back and see that Kevin was exaggerating how mean his family was to him. He was not. At all. I won’t say the McCallisters are trash, because I would never besmirch Catherine O’Hara like that, but they’re not not trash.

When it becomes clear that flying back to literally any city in the United States from France is going to be basically impossible, Peter just seems to accept it pretty calmly. Like “Welp, we’ve done everything we can, so let’s just go to my brother’s place, try to call the ineffective local police station again, and we’ll head back in a few days.”

Peter. Your 8-year-old son is home all alone more than 6,000 miles away. You’re just gonna let that happen until it’s more convenient for you to do something about it?

And then — AND THEN! This dummy gets on the phone to talk to the Parisian police. Like, sir: what the hell do you expect police in Paris to do about your small child home alone in Winnetka, Illinois?

As a parent, I cannot fathom his reaction. There’s keeping your head in a crisis and there’s this guy, who’s all but shrugging as he huffs “Well, what are you gonna do? These things happen!” If I were married to Peter, we would 100% be in marriage counseling after this. The only thing keeping me in the relationship, honestly, would be my own guilt about having also endangered my child.

(Well, that and the absolutely gorgeous house. I mean, that house is going to make anyone think twice about a divorce, amiright?)

As far as I can tell, this zoomed in shot is this is the only time we see Rob, Peter’s brother, and his wife Georgette in the entire movie. It’s their move to Paris that sets the action in motion as they’re moved by generosity and a sense of family togetherness to open their hearts, home, and wallets and fly 15 people from Chicago to Paris during the most expensive travel season of the year. They even sprung to fly the adults first class! But hey: it’s worth it for the whole family to be together at Christmas, right?

Except everyone stays for two days, eats the shrimp Georgette was saving “for later” and leaves. Merry Christmas, Rob and Georgette!

We need to talk about Kevin

As a mom, I am deeply, deeply concerned about Kevin’s mental state.

Look, I get it: he’s a smart but scared kid, it’s reasonable for him to try to protect himself. The BB makes sense. Even the toy cars on the floor feels like something an 8-year-old would come up with. But hot irons? Massive nails through feet? Blowtorches? He’s turned his house into a Rube Goldberg device of torture. Honestly the fact that he thought “Ooh, I’ll put the BBQ starter on the doorknob to sear a man’s flesh” speaks to the idea that Kevin has a deeply troubled little mind.

Quick question: do we know for sure that Kevin McCallister doesn’t grow up to be Jigsaw from the Saw movies? Because I feel like there’s some reasonable doubt...

Also? My adult body cannot handle watching all the agony these burglars go through. It was funny when I was a kid in 1990, but as a 21st century woman in her 30s? Like, I threw my back out yawning the other day. So the idea of slipping on ice over and over again gives me anxiety.

Still, bad parenting and possibly disturbed children aside, this movie absolutely rules... if for nothing else that it makes me feel better about my own parenting shortfalls.

More Like This
11 Great Movies About Dads & Daughters To Watch On Father's Day
10 Of The Raddest Movies From The '90s To Watch On Girls Night
Marcel The Shell Is Officially A Movie Star
Where Are The Toys Of Toy Story Today?