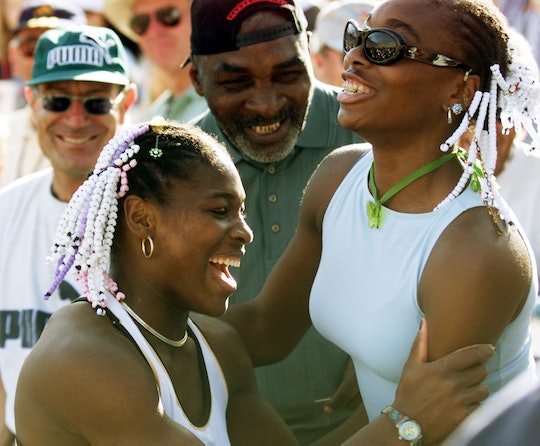 “I went to my wife and said that we have two kids, and we’ll become rich. They’re going to be tennis players.”

Behind two of the greatest athletes ever is an even greater man who raised them. King Richard is the father of Grand Slam champion legends, Venus and Serena Williams and one of the driving forces in their lives. Will Smith will portray Williams, now 79, in the upcoming biopic King Richard, premiering this fall in theaters.

Let’s take a quick break on Googling all the cute shenanigans his granddaughter, Olympia Ohanian, has been up and check out a few quick facts about her phenomenal grandfather.

He has three ex-wives

Williams is overall the father of five. He shares his oldest daughter, Sabrina Williams, 56, (who refers to him as a “sperm donor”) with his first wife, Betty Johnson, whom he married in 1965. The couple also had three more sons and a daughter had Richard III, Ronner, Reluss, and Reneeka. Williams and Johnson divorced in 1973.

From there he met and married Oracene Price in 1980, with whom he shares Venus and Serena. Price and Williams divorced in 2002. His last marriage was to Lakeisha Graham in 2010 which also ended in divorce in 2017.

He was their first tennis coach

All it took was watching a pro women’s tennis tournament on television and that woman winning some pretty good prize money ($40k to be exact) to get his daughters on the courts. Williams started giving his daughters tennis lessons when they were four-and-a-half years old.

“I went to my wife and said that we have two kids, and we’ll become rich. They’re going to be tennis players,” he said about the decision to CNN. But later admitted having second thoughts about starting them at such a young age.

“I feel like I started too early—at four years, six months, and one day,” he told the New Yorker in 2014. And looking back, he suggested starting at age 6 would be best for kids.

He taught his daughters resilience and adversity

Venus and Serena practiced at a local tennis court in Compton, California. Coach Williams moved his family there from Michigan when Serena was born in 1981. He recalled gang activity was everyone and sometimes he would have to fight gang members for him and his girls to use the court.

Williams recalled one of those fights in his 2014 memoir, Black and White: The Way I See It. “It had taken two years and almost destroyed my body and my spirit,” Richard wrote about one particular fight which resulted in 10 teeth being knocked out and broken ribs. “But in that moment, none of that mattered. What mattered was the courts were ours.”

However, he said that moment and others taught his daughters how to handle life when it attempts to knock you in the face, literally.

“In order to be successful you must prepare for the unexpected — and I wanted to prepare for that,” Williams said in an interview with CNN's Open Court, explaining why he let the girls be exposed to such abuse. “Criticism can bring the best out of you.”

In 2017, Coach Williams became the first inductee into the American Tennis Association’s Hall of Fame. That same year, he was also inducted into the Black Tennis Hall of Fame.

“Richard went from scratch, not knowing anything about the game other than seeing the pot he wanted to bring monetarily … and he learned the game and he taught it to his daughters,” said Dr. Franklyn Scott, ATA President of Education via WTA Tennis. “The Williams story has impacted so many African American children. A lot of the African American young females, they talk about ‘I want to hit like Serena’ and ‘I want to volley like Venus.”’

His mother was his role model

While he played an instrumental role in his daughters’ live, it was his own mother who influenced his.

In a 2015 interview with CNN, Williams talked about the lasting impression his mother had on him.

“She instilled in me so many positive things,” he said. “That’s probably my earliest memory, my greatest memory. People say to their kids or to themselves that they would be the thing they want. But she said that’s very difficult. It’s easy to say, but very difficult to be done. She was showing me ways of how it could be done.”