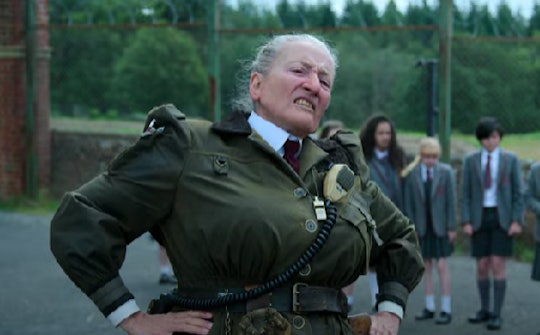 Will the chokey make its way into Roald Dahl’s Matilda the Musical?

If you never got to see the Tony and Olivier-award winning musical based on the beloved Roald Dahl story Matilda, you’re about to get your chance. Roald Dahl’s Matilda the Musical is coming to Netflix, and a first look at the trailer should be enough to get you excited about seeing the whole thing. Especially when you get a load of Miss Trunchbull.

Roald Dahl’s Matilda the Musical is coming to Netflix.

The Royal Shakespeare Company first introduced Matilda the Musical in London’s West End Theater back in 2011 to rave reviews, and now the rest of us get to finally see it. Much like Dahl’s 1988 classic children’s book Matilda, this musical centers around a precocious 5-year-old girl named Matilda Wormwood who loves reading and also happens to have telekinesis, which she uses to deal with her difficult family and one particularly difficult teacher called Miss Trunchbull. While fending off these forces she also tries to help her sweet teacher, aptly named Miss Honey, reclaim the life she once had. Miss Honey, in turn, becomes a massive help and support to Matilda as she recognizes just how special this little girl happens to be.

Emma Thompson is a force to be reckoned with as Miss Trunchbull in the first trailer.

The first trailer for Roald Dahl’s Matilda the Musical sees Emma Thompson playing the especially vicious school headmistress Miss Trunchbull, although she is almost completely unrecognizable in the role. “Matilda Wormwood, criminals like you need a real lesson,” Thompson says in the new trailer that dropped on Wednesday. She then heads into the yard of Crunchem Hall to shotput a young child off into the distance before barking, “See if that child is still alive” and the kids watching all cross themselves. So slightly dark, as Dahl’s stories often are. But also pretty hilarious. Alisha Weir stars as Matilda Wormwood, while Captain America’s Lashana Lynch plays Miss Honey.

When can you watch the Matilda musical?

Netflix has not yet set a release date for Roald Dahl’s Matilda the Musical, described in the official synopsis, per People, as “an inspirational musical tale of an extraordinary girl who discovers her superpower and summons the remarkable courage, against all odds, to help others change their stories, whilst also taking charge of her own destiny. Standing up for what's right, she's met with miraculous results.”

If you want to introduce your kids to Matilda before the musical comes out, you can’t go wrong with the 1996 live-action adaptation starring Mara Wilson as the title character along with real-life couple Danny DeVito and Rhea Perlman as her dastardly parents. This version is rated PG, and truly it stands up to the test of time with all of that wonderful rebellious magic.