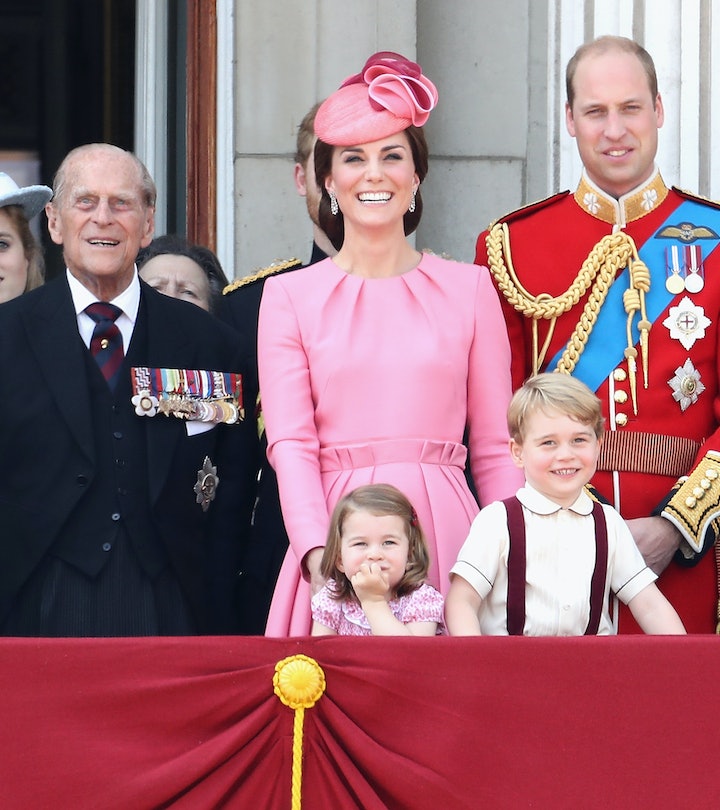 Members of the royal family have released private photos of the late Prince Philip spending time with some of his great-grandchildren.

“Today we share, along with members of The @RoyalFamily, photographs of The Duke of Edinburgh, remembering him as a father, grandfather, and great-grandfather,” a tweet from the official Twitter account of Prince William and Kate Middleton, the Duke and Duchess of Cambridge, read.

Accompanying the tweet was a photograph taken at Balmoral in 2015 of Prince Philip and the Queen standing between Prince William and Kate and a young Prince George and Princess Charlotte. In the photo, Prince George holds tightly to his father’s hand while his younger sister stares at the Queen from their mother’s arms.

Buckingham Palace also released a never-before-seen photograph of the Queen, Prince Philip, and seven of their 10 great-grandchildren. “The Queen and The Duke of Edinburgh surrounded by seven of their great-grandchildren at Balmoral Castle in 2018,” the palace wrote when sharing the photograph, which was reportedly snapped by the Duchess of Cambridge, across their social media channels.

Less than a month after being discharged from King Edward VII’s Hospital, Prince Philip died Friday, April 9 at Windsor Castle. He was 99 years old.

“It is with deep sorrow that Her Majesty The Queen announces the death of her beloved husband, His Royal Highness The Prince Philip, Duke of Edinburgh,” a statement released by Buckingham Palace read. “His Royal Highness passed away peacefully this morning at Windsor Castle. Further announcements will made in due course. The Royal Family join with people around the world in mourning his loss.”

In mid-February, Prince Philip was admitted to the hospital where he was treated for an infection and underwent a successful procedure for a pre-existing heart condition. He was released back home roughly a month later in mid-March.

In the days following Prince Philip’s death, multiple members of the royal family have paid tribute to him, remembering him a man of character. "My grandfather’s century of life was defined by service — to his country and Commonwealth, to his wife and queen, and to our family," NBC News reported Prince William said in a tribute to his grandfather.

In a statement of his own, Prince Harry referred to his grandfather as someone who was “authentically himself, with a seriously sharp wit, and could hold the attention of any room due to his charm— and also because you never knew what he might say next.”

Both noted Prince Philip would always be remembered in their and their children’s hearts.