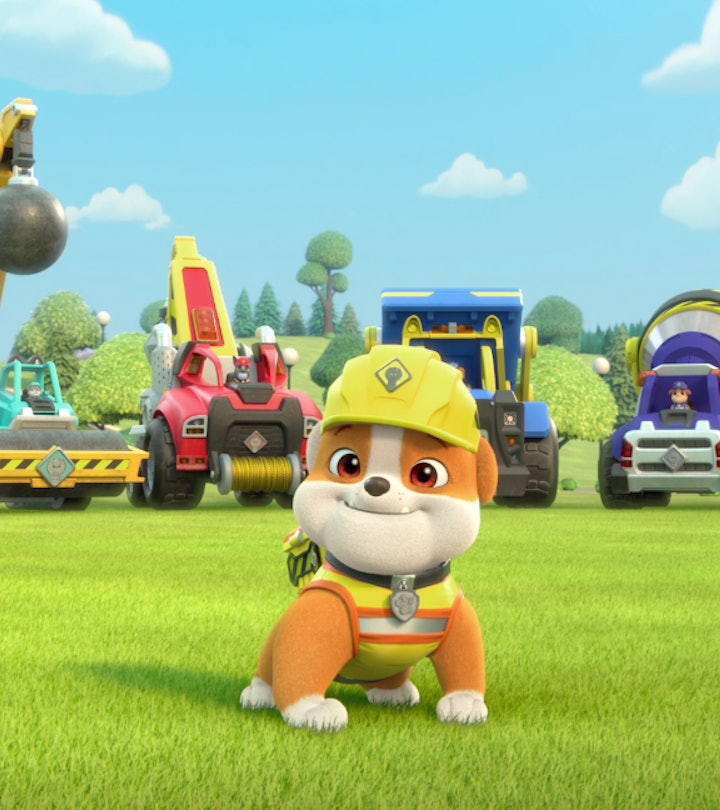 Get ready for Rubble on the double! Everyone’s favorite bulldog from PAW Patrol is getting his very own series! Let’s dig it! Rubble & Crew will premiere on Feb. 3 at 11:30 a.m. on Nickelodeon, with new episodes every Friday. The spinoff follows Rubble and his pup family (can you believe they’re all construction pups, too?!) as they use their super cool construction vehicles to build and repair whatever the town of Builder Cove needs. This new series comes at an auspicious time as PAW Patrol celebrates its 10th anniversary in 2023.

“As a proud member of the PAW Patrol, Rubble has stolen the hearts of preschoolers around the world with his loyal, optimistic nature and penchant for treats,” said Jennifer Dodge, president of entertainment and executive producer at Spin Master. “Our new series expands Rubble’s world with storytelling that digs into amazing construction projects and the importance of family, combined with high-stakes action, fun adventures and messy demolition that preschoolers will love.”

The show is set in quickly-growing town of Builder Cove, a community near Adventure Bay. (Their mayor? Mayor Greatway: sister to Mayor Goodway!) Rubble is able to step into a true leadership roll on this all-pup construction crew and soon discovers that while there’s a lot that needs to be built — an airport, train station, bridges, tunnels, schools, fire stations, parks and much more — there’s nothing that can’t do if they work together! Rubble is joined by his cousins — Mix, Wheeler, Charger, and Motor — along with Grandpa Gravel and Auntie Crane. Each has their own specialty, from painting to demolition, and contributes something special to the team.

Let’s dig into this preview!

But don’t worry PAW Patrol fans: there’s plenty of Rubble to go around. Not only will the funny, good-natured puppy remain a fixture on the original series, Rubble & Crew will feature some special appearances from his Adventure Bay buddies!

Rubble & Crew premieres on Feb. 3 on Nickelodeon, with new episodes every Friday

More Like This
New Blippi Live Show Is Coming To A Stage Near You In 2023!
20 Heartwarming Episodes To Help Prepare Your Child For A New Sibling
'Sesame Street' Puts Fun Spin On 'The Nutcracker' In New Holiday Special
Surprise Your Kids With This Exclusive Sneak Peek At Mickey Saves Christmas