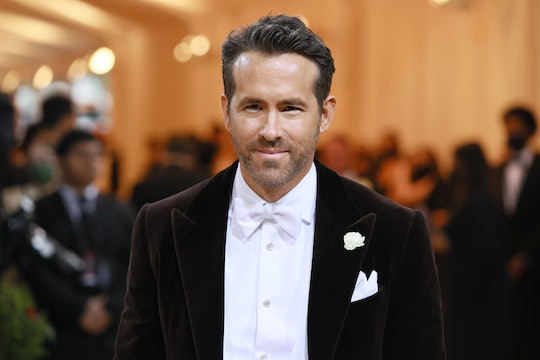 Ryan Reynolds Jokes His Daughters Are So “Wild,” He Thinks “They Have Rabies Sometimes”

After a slew of celebs moms took to Instagram on Father’s Day to lavish praise on their partners and enter their husbands into the unofficial running for who is the best celeb dad, Blake Lively was suspiciously quiet. Lively, who shares daughters James, 7, Inez, 5, and Betty, 2, with Ryan Reynolds can’t be bothered with such a public campaign because she already knows that she’s locked down one of the best. Time and time again, Reynolds manages to keep it real, bring on the laughs, and even make you a little misty-eyed when he talks about his life as a father. This time was no different when Reynolds sat down for a chat in Cannes and shared a little insight into life with his daughters and how his brutal parenting mistakes are actually the reasons he’s so successful.

The 45-year-old actor, dad jokes connoisseur, and viral gin-slinger entertained and enlightened a live audience at a discussion called “Creativity at the Pace of Culture” at the 2022 Cannes Lions International Festival of Creativity. He talked about his best favorite button-pushers and most unruly teachers, namely his three adorable daughters.

“I’m a parent of three girls. They’re wild. I think they have rabies sometimes,” Reynolds joked. “I’m like any parent – I’ll have a moment where I’ll just snap. It’s not so much what you do in the moment that’s interesting, it’s what you do afterwards.”

It’s these moments when Reynolds is both authentic and hilarious that make him one of the most relatable and lovable famous fathers. Not only did he also share that he walks his kids to school everyday, he got down in the trenches with the rest of us frustrated parents by aptly nicknaming the experience of his children attending school over Zoom as the “tent circle of hell.”

The Deadpool star went on to reveal that his “brutal mistakes” as a parent are the secret weapons for his immense success, and that obstacles provide opportunities for growth. “I used to tell my kids, ‘Don’t waste your mistakes,’” he said. “When you’re making mistakes it’s easy to sort of be absorbed by shame and sort of this idea that you’ve done something wrong, but you also have to look at it critically and use it as a stepping stone to learning something profound.”