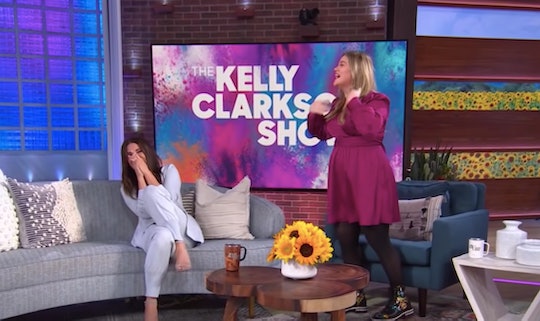 “Did you just call me a whore?”

When two moms get together for a chat, it doesn’t really matter if the cameras are rolling or not. Whatever happens, happens. Sandra Bullock and Kelly Clarkson laughing hysterically throughout an interview on The Kelly Clarkson Show is proof, in case you needed it. The two moms were meant to be sitting down for an interview about Bullock’s new Netflix movie The Unforgivable. Which they did talk about, eventually. After laughing over topics like homework with their kids, cell phones, and weirdly enough, Bullock’s dead parents. That one really had them chuckling.

Clarkson, who is mom to 7-year-old daughter River Rose and 5-year-old son Remington with ex-husband Brandon Blackstock, got the ball rolling right out of the gate by telling Bullock she was “nervous and sweating.”

“You’re Sandra Bullock and I’m a huge fan!” Clarkson explained to Bullock, who is mom to 11-year-old son Louie and 8-year-old daughter Laila. “You’re on my Wayfair app, you can’t look at my stuff and buy stuff,” Bullock responded.

From there the two moms talked about doing “new math” with their kids. “I don’t understand it. I don’t even try,” Bullock said, with Clarkson adding, “I don’t either. I think maybe you should phone a friend for that one.”

Kelly Clarkson and Sandra Bullock were every mom on a night out during their interview.

Things really went off the rails when Clarkson asked, “Is it true that your kids have a talent for singing?” Bullock explained, “My daughter does. She has some pipes. You know, they say it skips a generation. My parents were singers. They’re dead.”

Perhaps not hearing that last important detail, that both of Bullock’s parents had died, Clarkson said, “But they were singers though? Okay but that’s cool.”

And then they both started to laugh hysterically.

After taking a bit of a break from their laughter to discuss Bullock’s movie, they got back into their laughing. And talking. And sweating. At one point, Clarkson asked Bullock if she decorated for Christmas “or,” and Bullock laughingly said, “Did you just call me a whore?” Clarkson laughed so hard she had to get up and walk around, with Bullock doubled over on the sofa.

This exchange could not have been more like a real life moms’ night out if it tried. Two women, both busy with kids and careers and life in general, getting silly together. All that was missing was wine and cheese.