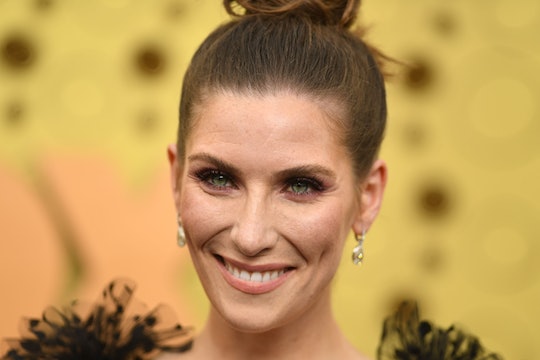 Dan Levy is excited to “finally like a baby.”

The Schitt’s Creek family legacy continues! Sarah Levy, who everyone remembers as Twyla from the massively popular CBC series, is going to become a mom for the very first time. She and husband Graham Outerbridge announced on Tuesday that they are expecting their first baby together, and of course her brother, Dan Levy, immediately weighed in as an expectant uncle.

Levy took to Instagram to announce her pregnancy with a photo of herself wearing a long white button down shirt and a pair of shorts, happily cupping her baby bump. “We’ll take all the salt & vinegar chips and the hottest hot sauce you have, thx!” she captioned the photo.

While neither she nor Outerbridge, an actor known for roles in TV series like Agents of S.H.I.E.L.D. and Britishes, shared the due date or the sex of the baby, there’s one thing we know for certain. Her older brother Dan Levy, co-creator of Schitt’s Creek, is very excited to become an uncle.

“I’ll finally like a baby! (Minus a few select others),” he commented on his sister’s announcement, which feels sort of on-brand for the man who created David Rose if you ask me. He even shared his sister’s pregnancy announcement on his Instagram Story, so that’s saying something.

This will be the first grandchild for Eugene Levy and his wife Deborah Divine, who have not yet publicly commented but are presumably just as excited to meet a baby they will like as their son seems to be. Or they are hastily packing up the requested salt and vinegar chips and hot sauce their daughter is craving. Levy’s friend and former Schitt’s Creek co-star Annie Murphy, aka Alexis Rose of “Ew, David!” fame, commented on the news however. “REMEMBER HOW YOU’RE PREGNANT?” she wrote on Instagram. Katie Couric also wrote “Congratulations!!!!!!”

Outerbridge and Levy have been married since October 2021, and Dan Levy was actually the first one to break the story at the time. “My sister got married this weekend,” he wrote in an Instagram post featuring a black-and-white shot of the two of them singing their hearts out on the dance floor. “This is absolutely not a photo of us screaming the lyrics to S Club Party on the dance floor. Love you, @sarahlevy.”

A new generation of this talented, funny, lovely family is pretty exciting for everyone. Even uncles who don’t traditionally love all babies.

More Like This
Tom Hiddleston & Zawe Ashton Are Expecting Their First Child Together
Patrick Mahomes & Brittany Matthews Reveal They're Expecting A Baby Boy In Sweet Video
Ginger Zee Had A Perfect Response After A Troll Asked Her "Who's Raising Your Kids?"
Lauren Conrad Shares Experience With "Lifesaving Reproductive Care" After Ectopic Pregnancy