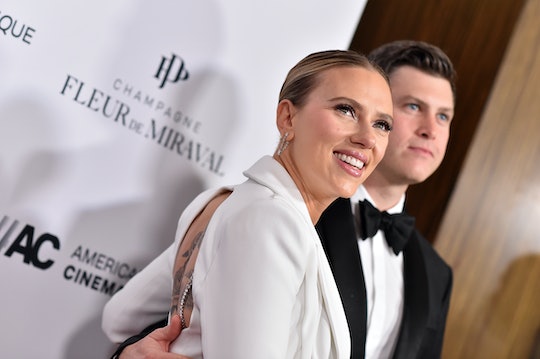 Ever since the birth of her son Cosmo in August, Scarlett Johansson has been keeping a low profile. Spending time getting accustomed to her new life with her baby boy and her husband, Saturday Night Live’s Colin Jost, and 7-year-old daughter Rose. Now that she’s had more than four months as a mom of two, Johansson graced us all with a rare update on life with baby Cosmo. And it’s surprisingly relatable.

Johansson sat down for an interview on The Ellen Show alongside U2’s Bono to promote the new movie Sing 2, and right away she and Ellen DeGeneres got down to the business of discussing her kids. “How does [Rose] like having a little brother?” DeGeneres asked. Johansson’s response was hilarious. “Um... I would say she’s pretty neutral about it. Yeah. Pretty neutral about it. Which I think is a good thing.”

The Black Widow star went on to describe how Rose, who she shares with ex-husband Romain Dauriac, reacts when she sees her baby brother after a day out. “She’ll come home, and she’ll be talking a mile a minute. And I’ll have to remind her ‘Hey, say hi to your brother.’ And then she’s like, ‘Oh my god he’s so cute,’ and then is back to just going on and on. I think being seven is pretty psychedelic.”

As for baby Cosmo, he just hit a fun milestone. “He just, like, discovered his feet,” Johansson told DeGeneres. “Which is, like, the biggest thing ever.”

The proud mom added that she’s already seeing how her baby boy’s personality is different from her daughter. “I imagine that they'll be very different people,” Johansson said. “You know, my daughter is very, you know, she's a little bossy, I don't know where she gets it from, and she's very headstrong….Well, he's just putting his feet in his mouth. So, he seems pretty laid-back.”

Cosmo might be the more laid-back of Johansson’s two kids, but he definitely has the more unusual name. So much so, in fact, that Colin Jost’s mom asked her son to reconsider his name when he was born, even giving him other options he could use instead. Four months later, he is still Cosmo. Just putting his feet in his mouth and getting mostly ignored by his older sister. Not such a bad gig in the end.