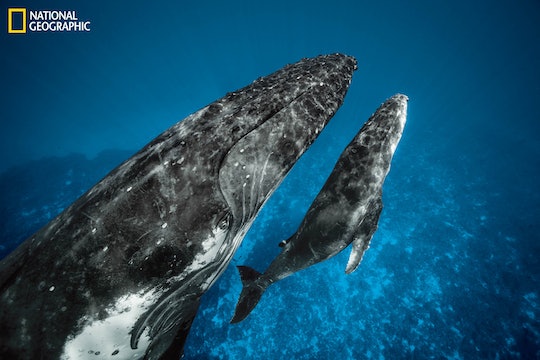 Watch a humpback calf as it learns to blow a bubble net in Secrets Of The Whales, a four-part special hitting Disney+ on Earth Day.

“Like a toddler learning to walk.” That’s how Sigourney Weaver describes a humpback calf as it learns to blow a “net” of bubbles to corral fish in an exclusive clip from National Geographic’s Secrets of the Whales special on Disney+. While this humpback calf doesn’t get it quite right on their first try, their journey in learning is one kids and parents alike will relate to. Get a sneak peek at their first attempts below and learn why whales are considered to be the most unique families in the ocean when Secrets of the Whales premieres on Disney+ later this month.

After more than three years of filming in two dozen locations spread across the world, Academy Award-winning filmmaker and conservationist James Cameron and National Geographic explorer and underwater photographer Brian Skerry are bringing Disney+ subscribers into the mysterious world of whales. And what you learn might surprise you.

Much like us, whales experience a range of emotions. They love, play, grieve (take, for instance, the orca mother who carried her dead calf for an emotional 17 days in 2018), and can even express affection. Narrated by Golden Globe winner Sigourney Weaver, National Geographic’s new four-part series Secrets of the Whales gives viewers an up-close look at whales' distinct social structures and culture, uncovering exactly how they communicate and coexist.

In a clip shared exclusively with Romper, Weaver describes how one humpback calf must learn to blow a P-shaped ring of bubbles before he can participate in the pod’s cooperative feeding methods. It’s an important teaching moment for the calf as these spiraling bubble rings, or “nets,” are how whales corral fish, forcing them up toward the water’s edge where the pod will feed. If he can’t master the ring of bubbles, the calf might not be able to feed as part of the pod and could go hungry.

“Like a toddler learning to walk his first attempts are adorable but all wrong,” Weaver says in the clip as the humpback calf struggles to blow a steady stream of bubbles while swimming in a spiraling circle. After a few failed attempts the calf gives a snort of frustration. But eventually, with a little more practice, he begins to master the pod’s feeding technique.

“Over the course of a few weeks he gains more confidence,” Weaver says. “His letter Ps start to show promise.” But are his rings good enough to join the pod in a feeding? Check out the clip above to see if the humpback calf managed to perfect his P-shaped ring in time.

National Geographic’s four-part special Secrets of the Whales premieres on Disney+ just in time for Earth Day on April 22.

More Like This
'Hocus Pocus 2' Officially Has A Release Date To Look Forward To
20 Of The Best Movies To Watch This 4th Of July
Everything Families Need To Know About The Westminster Dog Show
Exclusive Eureka! Clip Introduces Star Of Disney’s New STEAM Preschool Series