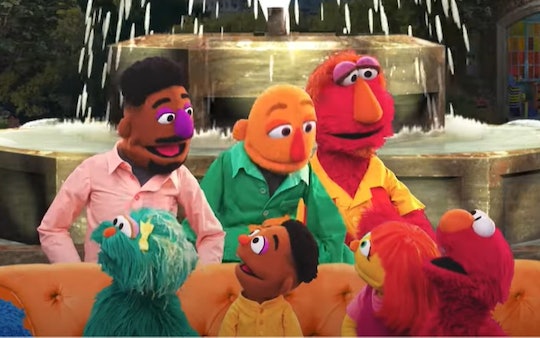 No one told Sesame Street that life was going to be this way!

Sesame Street is paying homage to Friends for Father’s Day! The classic children’s show is celebrating all dads with a fun parody of the classic sitcom’s theme song, “I'll Be There For You.” The 2-minute video is full of Friends Easter eggs, like a rendition of “Smelly Cat,” a callback to Ross’ “pivot!,” and that Thanksgiving turkey hat.

Released ahead of Father’s Day, the new music video features characters Elijah and his son Wes, Elmo’s dad Louie and Julia, and Samuel’s dad, Daniel. At the end of the video is a message that reads, “Fathers are our forever friends. To all the fathers and father figures raising amazing kids: thank you for being there.”

“Dads like Elijah (and other male role models) have a huge impact on their children’s lives, and when kids feel supported, understood, and loved by their fathers, they grow up more resilient and successful in school,” Sesame Workshop said in an email statement sent to Romper. “A key thing dads can do for their children is spending focused, quality time together. It may seem small, but there’s a huge value when dads are attentive, loving, and ask thoughtful questions.”

The video follows a series of other videos Sesame Street has released to commemorate dads. Previous videos have featured Elijah when he took his son to work with him as Sesame Street’s meteorologist and their father-son trip to the barbershop.

Muppets Elijah and Wesley Walker were first introduced to Sesame Street in 2021 as part of the show’s initiative regarding racism. Elijah’s puppeteer, Chris Thomas Hayes, told Time that he wanted to make sure to capture the spirit of fatherhood with his character. “A lot of the things they wrote, I was looking around, like, ‘Are they watching me?,” Hayes told Time. “Because it says there is a 5-year-old son; I have a 5-year-old son. It’s really been a moment of thinking about the conversations and the situations that I’m going to be dealing with my kid being in this world. And that’s something I hope that I bring to the character.”

In addition to sweet videos the the Father’s Day Friends parody, Sesame Street has multiple resources to support fathers and families on website.