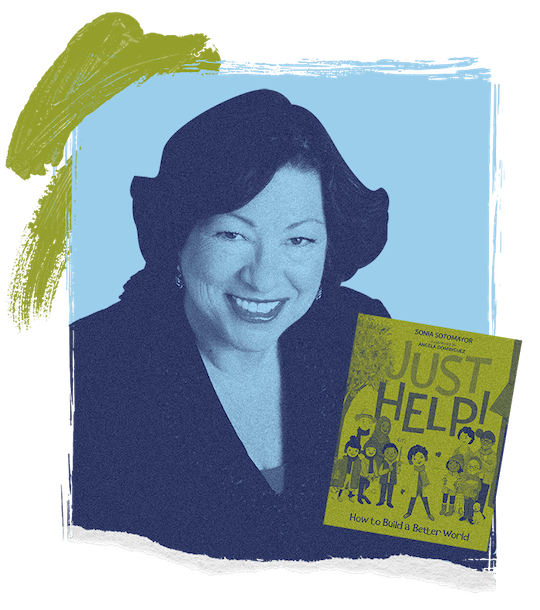 “What we hope for is that you'll find better answers than we have.”

“I want my legacy as a justice to be to inspire children,” Supreme Court Justice Sonia Sotomayor tells me on a recent brisk winter afternoon. “To dream about dreams they don't know about and to understand that their possibilities are limitless.” Sotomayor’s day job, of course, sets an example for every kid to look up to — but the Justice is also heavily involved in iCivics, a nonpartisan organization founded by Sandra Day O'Connor dedicated to fostering democracy through civics education. And now, she says, she sees her fourth children’s book, Just Help! How To Build A Better World, as part of this effort to encourage children to be engaged in their communities.

“I really want kids to understand that they can make a difference and it doesn't have to be a difference as big as being on the Supreme Court of the United States or even being president of the United States or senator or governor or anything else,” she says. “It starts by living your life every day, looking outside of yourself and making small, medium, and — when you can — large steps to better the world.”

Sotomayor credits her mother, Celina, with being a living example throughout her childhood of what it means to serve one’s community with an expansive heart. Celina, a nurse from Puerto Rico, was the one everyone in their vibrant community in a Bronx housing project came to when they needed help. “People that she didn't know, total strangers who heard she was a nurse would come to our door and say, ‘We heard you could do this. We're having a problem with blood pressure. We don't know how to use the machine. Can you help us?’” Sotomayor recalls. “And Mom wouldn't just show up once. She would stop by regularly with total strangers to make sure that they were doing it in the right way.”

Witnessing her mother’s powerful commitment to the community inspired young Sonia to become an attorney, fueling her path to one of the most influential seats in the country. “I understood very early on that service meant not just helping family, but helping community — and improving the quality of life not just of yourself and the people that you know, but of the larger community that you are a part of,” Sotomayor says. “And that example was a shining light for me.”

You simply cannot just let things happen to you or to the world. We have an obligation to participate.

From her blunt and fiery advocacy for abortion rights to her fight to protect affirmative action programs, Justice Sotomayor has translated the lessons gleaned from her mother into a lifetime of commitment and service. Now, she’s gifted all of us parents and caregivers with these lessons in the form of Just Help!, a delightful story about little Sonia and her mother, who start each day with the question: “How will you help today?” This question becomes a north star for little Sonia to commit to acts of service that help everyone, not just her friends and family. Beautifully illustrated by Angela Dominguez, the book speaks to how those little acts can be the path to a deeper commitment to our communities and our country, and can have a ripple effect that touches so many.

I had the honor of chatting with the Justice about her book, and learned a few things about parenting little changemakers, not the least of which was her surprising advice for kids on coping during the pandemic.

In Just Ask!, the characters represent a range of people, from Muslim people to disabled people. Why was it important for you to depict so many different identities?

I have believed from the moment I started with my children's books that I had to do that. … For me, both translating all of my books into Spanish immediately when they're published, and making sure that my books represent the world as it exists, not an idealized version, is very critical to inspiring children.

What was your favorite children's book as a kid living in the Bronx? Did you notice a lack of representation then?

So when I was a child, I learned Spanish before English and I don't remember there being Spanish children's books in my public library at the time. And there weren't many in my home, but there were some. My mother was learning from her environment, too, of what might be useful to kids. And so the first reading that I did with any real consistency was the Highlights magazine. I don't know if it represented children of diverse backgrounds, but I certainly don't remember any. And if there were a few, it would've been of Black people's background. I certainly don't remember seeing Latinos in anything I read as a child. I mean, all of the things that Mom would've heard about to pick up for me certainly didn't have representation of kids that looked like me.

Wasn’t this sad? And how did that affect me? It certainly leaves you with a sense of being different, but not in a positive way. Different in a negative way, that somehow the idealization of an acceptable child, a curious child, an intelligent child, that those are children who look a certain way, and if you don't look that way...

I had very curly hair and I still do. I didn't have the straight hair of many of the people in my grammar school or in my high school. Those differences can affect your self confidence and how you feel about yourself. I have a goddaughter who has exceedingly curly hair, and she has been asking her mother to straighten her hair. I got her a book about this. That situation with her showed me that the absence of representation and literature of diverse kids is a real negative for our community.

You're absolutely right. And I think the public library has really come a long way. We take our kids to the library about every other weekend and there are a whole lot more books. There are more books about Black kids now, but not as many about Latino kids, so that's certainly something that needs improvement.

Yeah. But, back then, talk about Latino kids, there were even less about Asian children. Like I remember the few that there were… it wasn't always positive. There really is a dearth of representation of diversity in books.

Parents should understand that improving the world is all our jobs. That your kids and us, as adults, have to be actively engaged in the process of saving the world and making it a better place.

The pandemic has been so hard on kids. Is there anything that you'd want to say to them on behalf of the grownups who are supposed to be in charge right now?

I often ask children, “Do you hear your parents say to you, ‘you're our future?’ And do you know what that means?” And there'll be a variety of answers.

I think what I want to tell them is, “Parents haven't fixed the world and parents don't have all the answers. What we hope for is that you'll find better answers than we have. And that's why we're engaged in wanting you to participate in making the world a better place.”

Your answer was really amazing for kids — that they can also participate in problem solving, because the reality is that we're all scared right now. What's the one thing that you would tell a parent who wants to take action to ensure that we have a future to actually hand over to our kids?

“If you want your kids to have a future, you have to work actively at making it for them. You can't be bystanders in life. You simply cannot just let things happen to you or to the world. We have an obligation to participate.” Hence, the focus on voting in my book. It's a message, not just to children, but to their parents, that voting is a critical way of ensuring that things are done to better your communities.

But that's just one example. [Show] your kids that you are participating in neighborhood watches so people can talk about how to improve a neighborhood, make it safer for everyone. Show your kids about recycling. That's one of the vignettes in my book. It's such a simple thing that everybody can do. Parents should understand that improving the world is all our jobs. That your kids and us, as adults, have to be actively engaged in the process of saving the world and making it a better place.

What's one thing you'd want to tell little Sonia about growing up in this world?

Oh, it's so big and so diverse. And I don't know if she will understand that. So let me try to put it into context if I can: “There's so much that goes on in the world. People have hundreds, if not thousands, if not millions of jobs. People read so many books. Today, there are so many shows on television. And now with the internet, we can see movies that are decades old. There is much variety, maybe diverse is the wrong word. The world is a wonder. There are so many things in it to excite you. So many things to be curious about!”

We all suffer from the problems of everyday living — you know, your cold is the worst cold in the world; my brother was the most annoying brother in the world; my condition, diabetes, was really hard. But every time I've thought about all the difficulties, I think about all the good the world has. Little Sonia shouldn’t spend time being angry at any of those things. She should spend much, much more time enjoying the wonders of the world — and figure out how to make those wonders even better.

This interview has been edited for length and clarity.

More Like This
Yes, Your Young Children Belong At Abortion Rallies
Advice For Rihanna On Having A Baby In This Country, From One Black Mom To Another
Karamo Brown Teamed Up With His Son On A New Children’s Book To Share A Powerful Message
21 Rainy Day Summer Activities