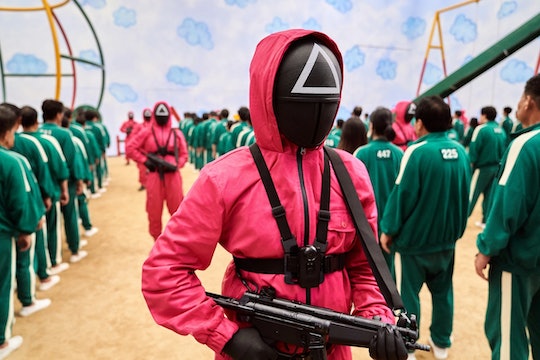 Squid Game: The Challenge Reality Series Is Coming To Netflix

You can even be a contestant.

There is no doubt that Squid Game was the biggest hit Netflix has ever seen, and that’s saying a lot for the streaming service. The story of Seong-Gi, a divorced dad struggling with crippling gambling debt who joins 455 other people playing deadly children’s games in order to win a large cash prize, was an international hit. So much so that people were dressing up as the doomed contestants last Halloween despite the incredibly dark subject of the contest. People killing each other to win money. And now, apparently, the murderous game is about to become a reality series.

Squid Game: The Challenge is looking for contestants.

On Tuesday, Netflix announced plans to bring the fictional world of Squid Game to life with Squid Game: The Challenge. This new reality series will pit 456 contestants against each other in a bid to win $4.56 million, the highest prize money awarded in the history of television reality series, per Netflix. The streaming service is looking for contestants to compete in the new series, so if you think you would like to be a part of the real Squid Game you can go to Squid Game Casting and apply online.

No bloodshed is expected for this reality series.

While Squid Game was an incredibly violent, dark series about the lengths to which people will go to get out of debt (and how the wealthy love to watch them destroy each other along the way), Squid Game: The Challenge is fortunately not going down that road. “As they compete through a series of games inspired by the original show — plus surprising new additions — their strategies, alliances, and character will be put to the test while competitors are eliminated around them,” Netflix shared in a statement about the series. “The stakes are high, but in this game the worst fate is going home empty-handed.”

Reactions to Squid Game: The Challenge have been skeptical.

Early reactions to Squid Game: The Challenge have been skeptical, to say the least. Many people took to Twitter to wonder if any executives at Netflix actually watched the series or indeed understood that the entire point of the series was to call out the horrible lengths people will go to in an effort to escape poverty. “Way to miss the whole point of Squid Game,” wrote one social media user while another noted, “We don’t need a Squid Game reality show. Poor people already dying because of rich people.”

Is Squid Game: The Challenge appropriate for kids?

While the new 10-episode reality competition has yet to be rated as it is still in its early stages of casting, it will likely not get the same TV-MA rating that the original Squid Game received. People won’t be killed in this reality series, after all, so it could be something fun to watch for families with tweens.

Another season of Squid Game is coming to Netflix.

Netflix is doubling down with the series by renewing the fictional Squid Game television series for a second season. The South Korean hit is back for “a whole new round,” director Hwang Dong-hyuk announced in a statement on Netflix.

No word yet on that release date, but we can probably assume this second season will be bloodier than the reality competition.