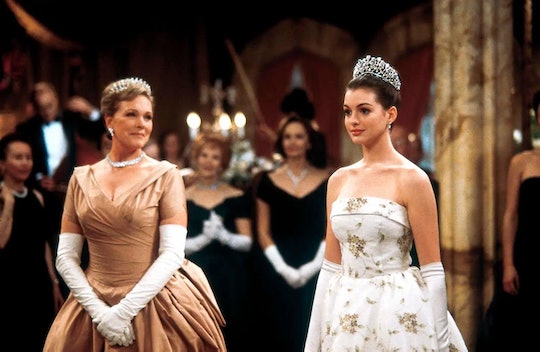 Mia Thermopolis Grimaldi better dust off her tiara and get ready to hit the screens again. A third installment of The Princess Diaries is officially in the works, and there will be rejoicing in the streets of Genovia by days’ end, I’m certain of it. Here’s everything we know so far.

Disney is heading back to Genovia for a third time.

As we all most certainly remember, the 2001 Disney classic The Princess Diaries, based on the book series of the same name by Meg Cabot, saw American teenager Mia Thermopolis (precious Anne Hathaway in her breakthrough role) discover that she was actually a Princess of the fictional European kingdom of Genovia. Her grandmother, Queen Clarissa Grimaldi (the incomparable Julie Andrews) brings her back to her own country to give her “princess lessons” to prepare her to become Queen herself. The second film, Princess Diaries 2: Royal Engagement, sees her return to Genovia after graduating Princeton to discover she can’t become Queen unless she marries within 30 days. Enter the dashing Nicholas Devereaux (Chris Pine) and a complicated love story. Plus a song from Julie Andrews. Perfection.

The Princess Diaries 3 is coming to Disney+.

A new script is currently being written for the third installment of The Princess Diaries by Aadrita Mukerji, according to The Hollywood Reporter. While there remains very little information about the new movie, it appears as though this film will be a continuation of the original two movies rather than a reboot based in the fictional world of Genovia. Producer Debra Martin Chase is returning for the third movie, which is set to be released on Disney+, the outlet reports, but what of the cast?

Anne Hathaway could return as Mia with one condition.

Hathaway has expressed enthusiasm for the possibility of a third Princess Diaries movie, so long as Julie Andrews could return with her. “I would more than entertain it, I'm pulling for it,” Hathaway told Entertainment Tonight. “If there's any way to get Julie Andrews involved, I think we would make it work. We would go to where she was and put a green screen behind her and just make it happen.”

In an interview in April 2020, Andrews said that she would be interested in reprising her role as Queen. “It’s long been talked about but nothing sort of been on my desk or anything like that,” she said, per Elle. “I think I would [do it]. I’m getting awfully old and crotchety. I’m not sure if it’s the right timing, but I think to work with Annie would be lovely again, and sure I’d be up for it. I think we should wait for — if a script comes in, let’s wait for that. Of course, we wouldn’t have the wonderful Gary Marshall who was the director. He’s passed. And he was really the nuts and bolts of it all.”

When could The Princess Diaries 3 premiere on Disney+?

As the script is currently in progress, no word just yet on when the third movie might air. For now we will have to rewatch the two originals on Disney+ and bide our time. Patiently waiting to revisit Genovia, hopefully alongside Queen Clarissa and Princess Mia.

More Like This
Pixar’s 'Turning Red' Is Nominated For An Oscar — Here’s How To Watch It Right Now
Freeze! The Single From The New 'Bluey' Album Just Dropped
Marcel The Shell Is Officially An Oscar-Nominated Movie Star
Watch An Exclusive Sneak Peek At 'The Amazing Maurice'
What Parents Are Talking About — Delivered Straight To Your Inbox