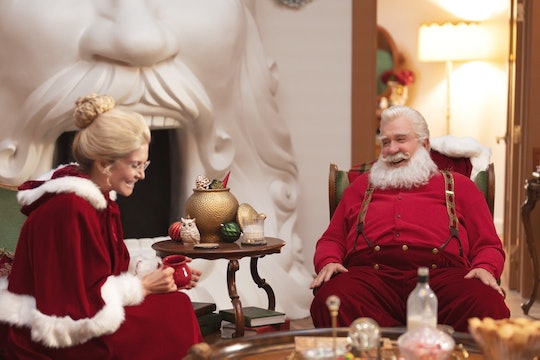 And Bernard is back, baby!

Disney+ is really hitting it out of the park with the nostalgic holiday picks this year. First off we get Hocus Pocus 2, and now the streaming giant is reviving another beloved classic for Christmas. Scott Calvin is back in a new Disney+ series called The Santa Clauses, as are several other faces fans will be excited to see return.

Scott Calvin is back in The Santa Clauses.

It’s been a long time since we have visited this particular version of the North Pole, with former toy designer and divorced dad of one Scott Calvin taking over the role after he accidentally scared the original Santa Claus off his roof. He struggled in his new job before eventually finding a wife in The Santa Clause 2 and defeating Jack Frost (Martin Short) in The Santa Clause 3: The Escape Clause, all of which sounds pretty exhausting. No wonder it looks like he’s ready to turn in the big red suit in The Santa Clauses.

Santa wants to hang up the red suit for good in the Disney+ series.

A new trailer for The Santa Clauses shared by Disney+ in October revealed that Santa Claus himself, played once again by Tim Allen, is trying to find a way for people to believe in Christmas again. Especially after a woman throws things at him when he comes down her chimney on Christmas Eve. He decides to retire so that “for the first time ever,” he can spend Christmas with his family. Which appears to include two new children who have grown up in the North Pole. The family decides to go spend time with regular people so they can see what that’s like, and all seems well.

Until it turns out he has hired the wrong Santa Claus to wear the suit. Which means that, once again, he has to save Christmas. Plus... Bernard is there at the very end. So obviously watch to the very end.

The Santa Clauses series premieres on Disney+ this November.

The limited series is set to drop on Disney+ on Nov. 16 and prepare to see some familiar faces.

Including everyone’s favorite elf Bernard, played by David Krumholtz, who shared a photo of himself in full Bernard gear with the caption “Miss me?” on Instagram. Bernard And the answer is a resounding yes. Eric Lloyd reprises his role as Charlie, while Elizabeth Mitchell is back as Mrs. Claus.

Fans are super excited for The Santa Clauses.

Fans could not be more excited to see the return of The Santa Clause franchise, particularly now that we know Bernard is back. “The legendary Bernard lives on,” wrote one social media user, while another noted, “Tim Allen looks more like Santa Claus than ever before.”

This article was originally published on Sep. 16, 2022