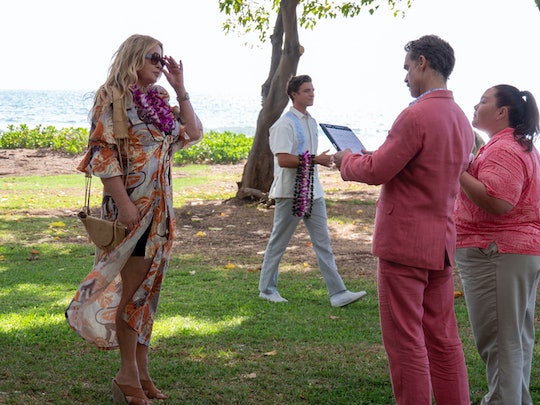 Sometimes we can have our own nice things.

HBO Max is giving us a second season of The White Lotus, this we know for sure. And if you don’t know if it’s worth your time to watch, you need to go back and revisit the first season. Because it’s great. As exciting as it is to see glimpses of the second season of one of the best shows to come from HBO Max, what will that look like for parents? Is the new season of The White Lotus going to be one you can watch with your kids, or are you better off waiting until they go to bed?

The White Lotus moves to Sicily in Season 2.

Season 2 of The White Lotus sees a whole new crop of guests arriving, as well as a different hotel manager, apparently. In a clip from the second season, Sabrina Impacciatore greets guests to “The White Lotus in Sicily,” much as Murray Bartlett welcomed guests in the first season (and anyone who watched the first season remembers what happened to that hotel manager the first time around). The new cast includes Aubrey Plaza, Michael Imperioli, Theo James, Meghann Fahy, F. Murray Abraham, Adam DiMarco, Tom Hollander, Haley Lu Richardson, Will Sharpe, Leo Woodall,Beatrice Grannó and Simona Tabasco, all of whom will either be guests of the resort or staff members.

Jennifer Coolidge is back advertising for the “Blossom Circle.”

Returning White Lotus guest Jennifer Coolidge is more than just a customer this time around. She’s also appearing in a commercial for the White Lotus resorts to promote their exclusive Blossom Circle membership. Apparently the events of the first season weren’t enough to dissuade her from giving The White Lotus another go.

When will The White Lotus Season 2 premiere?

So, can you watch The White Lotus with your kids?

Speaking of the events of the first season of The White Lotus, I think most of us can agree that season was definitely not for kids. Common Sense Media gave it a 17+ rating because of sex, nudity, and drug use. And let’s face it; there was a lot of sex and drug use, not just little snippets. There was also a lot of swearing and of course, the season ended with a murder.

What is The White Lotus rated?

The first season of The White Lotus on HBO Max was rated TV-MA for sex and nudity, violence and gore, profanity, alcohol and drug use. In other words, it had everything.

TV-MA but also all the Emmys nominations.

Season 2 of The White Lotus should see more of the same.

The second season of The White Lotus is still a big mystery for the most part, but it seems likely that there will be more of the same coming. Solid performances, gorgeous scenery, intrigue. And most importantly, Coolidge’s Tanya making her triumphant return. Put the kids to bed and watch.

More Like This
'Squid Game' Is Coming Back For Season 2 On Netflix: Here’s What Parents Need To Know
Kid First Responders Rescue Puppies In Disney’s Cute New Series
Exclusive: Three Siblings With Super Powers Protect National Parks In Spirit Rangers
School Is Back In Session! 'Abbott Elementary' Was Officially Renewed For Season 2

This article was originally published on July 23, 2022